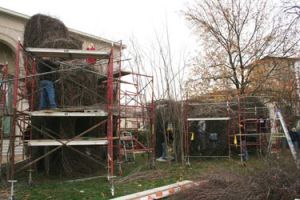 How often is art exciting and new, yet can also establish an immediate connection between the audience and the art itself? Patrick Dougherty’s sculptures do all of these upon first assessment because bringing nature and art together in a way everyone can understand is something that this internationally-known sculptor does best.

With his artistic skills and experience outdoors he creates a unique fusion of two worlds by weaving saplings into sculptures that are functional, depict motion and are usually the size of a small house.

Dougherty says that his first inspiration for putting these sculptures together came from his childhood memories and that his vague interest in construction with sticks soon grew into something significant.

“As a child you build a lot of things and sticks are really functional,” Dougherty said, “When you’re a stick person you can look at each one and see what you can do with it, whether it can be a good walking stick or made into a trellis or something like that.”

He also said that he had first started in ceramics but found that using saplings allowed him to do what he couldn’t with clay.

“I discovered that it’s another way to draw and that you use a lot of the same conventions for drawing with making these sculptures. The lines you see on the outside of the sculpture are just that,” Dougherty said.

He uses volunteers to help with the harvesting of the saplings and the basic structure of the sculpture because he limits himself to a three week time period in which he must gather materials and create his sculptures.

“It’s a great way to involve the community and get to meet people,” Dougherty said and even though he has a lot of help he always does the outer weaving of the saplings himself.

Cindi Morrison, director of the Mulvane Art Museum, said that she had seen two of Dougherty’s pieces before and had worked at a museum in Lancaster, Pa. when he had installed one of those pieces.

Morrison’s reason for asking Dougherty to install a sculpture on the front lawn of the Mulvane Art Museum was that she had experienced firsthand whathappens when he builds a piece in a community.

“I want the museum to become more visible to the community and to increase visitors,” she said, “People will drive by the museum but this sculpture is something that will make them want to get out of their cars so they can walk into it.”

Dougherty said that his inspiration for his work at the Mulvane Art Museum came from the architecture of the museum building, the parking lot and surrounding light poles, and from the nearby Mount Hope Cemetery.

After that he began to get a better picture of what he wanted for the sculpture in front of the Mulvane Art Museum.

“The museum building has these nice arches and a sense of formalism. It’s very symmetrical and I wanted to throw it off a little by putting something wild and untameable in front, but with a bit of classicism and formalism about it that trips and falls and doesn’t live up to the building beside it,” Dougherty said.

Dougherty also said that he can never predict what the sculpture will look like exactly before it’s finished, but that he expects that because he works toward an idea with his work rather than an object. He fully expects to be finished with his sculpture in the three week period he has allotted himself and is excited to see how the sculpture and museum building will react to each other.

The official opening for this sculpture will be Friday, Nov. 20. Starting at 6:30 p.m., Dougherty will be giving a lecture about the sculpture in room 143 of the Garvey Building.