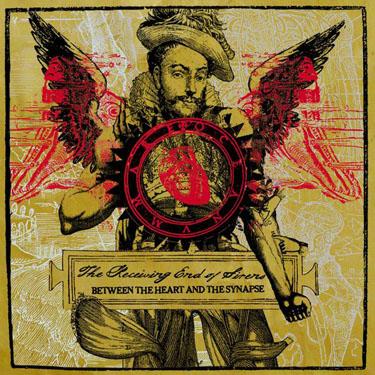 As an avid listener of many different types of music, it takes a lot for an album to really hit me. With that said, it felt like “Between the Heart and the Synapse” by The Receiving End of Sirens punched me in the face the first time I ever heard it.

Displaying instrumentation and complexity few bands can match, and possessing lyrics that will boggle even the most intellectual of minds, The Receiving End of Sirens’ debut CD — released back in 2005 — clocks in with more than 70 minutes. It is filled with heartfelt melodies, many of which are moments where listeners will be in awe of the sounds filling their ears.

It’s also hard to place the album as a whole in a category, but if I had to place it in a category, I would likely call it as an indie group with experimental tendencies. But even if that doesn’t sound like your cup of tea, don’t turn away just yet.

The album begins as many do with an intro titled “Prologue.” This is one of the few moments on the 13-track album that is skip-worthy. Heading into the first real track, “Planning a Prison Break,” three singers are in full activity of the vocal, and the guitar lines often overlap because they also possess a three guitar attack.

While each song on the album eventually has distinctiveness and its own personality, as any album it does, “Between the Heart and the Synapse” does have its standouts.  “The War of All Against All” is track five on the album, and maneuvers its way through a variety of tempos. It is one of the longest songs on the album, clocking in at six-and-a-half minutes.

At the around the 4:25 mark, the song begins to slow and goes into a beautiful two minute outro to the next song “… Then I Defy You, Stars.” The outro is a common element of the album, as almost every song transitions in almost perfect elegance to the next.

Without speaking about every song on the album, which I could easily do if I had the space, The Receiving End of Sirens crafted more than just music with its 2005 release on Triple Crown Records. It’s a journey, an experience and something that feels completely new.

If you listen closely, the album as a whole repeats portions of songs in more than one track, which allows listeners to feel like they’re listening to a complete concept album, rather than just individual tracks.

Even the album artwork, with William Shakespeare morphing and changing, evokes wonder from the listener.

I can honestly say “Between the Heart and the Synapse” is the most complete album I’ve ever laid ears on. Even if post-hardcore styled indie music isn’t your idea of listening bliss, give this CD a shot. Even a simple look at the lyrics will show that this album was not just an overnight thought, but an entire project and process.