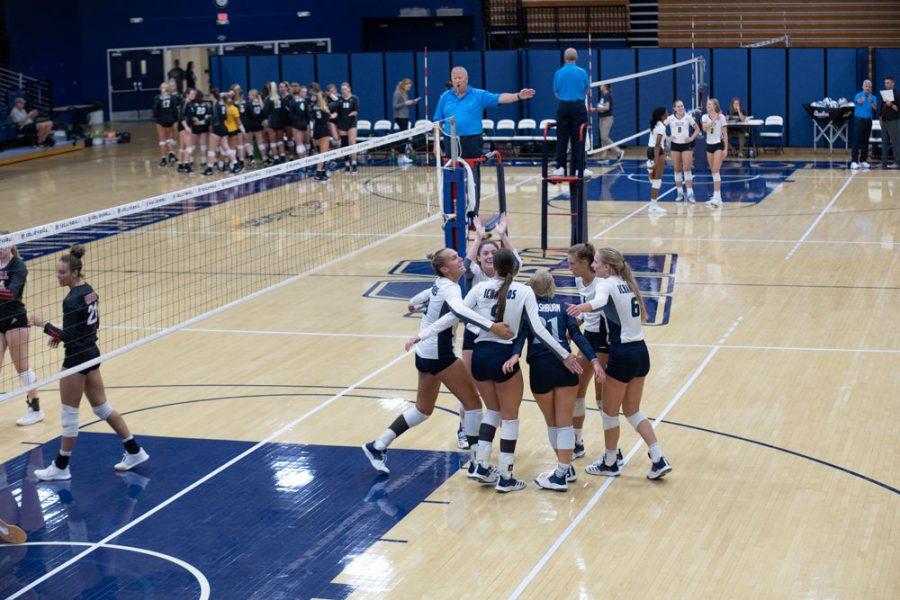 In Washburn’s second match of the Capitol Plaza Invitational, they took on Texas Woman’s University. The lady bods started the match off strong, forcing TWU to call their first timeout of the match. Outside hitter Genna Berg was red hot, pushing the Ichabods to an early lead of 7-1.

With great defense at the net from Allison Sadler and Kelsey Gordon, Washburn pushed the score to 15-10 after an intense back and forth rally. Sadler started the first set with great defensive plays, and gave her team a lift as TWU began to rally back. TWU struggled to keep a sequence of consecutive points until the middle of the set when they closed the distance to only one point at 16-15.

Toward the end of the first set, there was a point dispute called Washburn’s way that was soon reversed into TWU’s favor. The controversial call was quickly overcome, as outstanding hits by Berg and Gordon gave the Ichabods the momentum necessary to secure the win by a six point lead. Washburn closed the set with five straight points and won 25-19.

The match became far more competitive in the second set, TWU started fast with a 3-5 lead after gaining 3 points on kill blocks. After the slow start, the bods quickly picked up the pace and jumped the lead with killer serves by Genna Berg, which brought the score to 11-8. The momentum forced a TWU timeout. TWU came out strong after the timeout and both teams were neck and neck throughout the set. MaryAna Barnes made her first appearance of the tournament and was stout at the net with her defense. Sadler set Gordon up for a vicious spike to add to the bods lead. Finally, two monster kills by Allison Maxwell allowed the bods to pull in front and win the set 25-21.

The Ichabods took over completely on the third and final set. A strong 5-1 start forced two early timeouts by TWU. Great offensive plays from the bods continued to put a strain on their opponent’s defense. Berg had a superb match with several kill shots extending the score 16-7 midway through. Many errors by TWU gave the bods a comfortable lead, and another fierce kill by Berg gave the Bods a 10-point lead, 18-8. An ace from Madison Johnson put TWU in a bind, extending their deficit past ten points. Serving the last 3 points of the match, Berg brought the match to an end at 25-12.

The Ichabods finished the game by winning three matches in a row.

The Bods finished the day 2-0 with victories over William Jewell College and Texas Woman’s University. At the end of the match, Head Coach Chris Herron discussed how the first two victories of the season felt.

“Good! First match was a little shaky. You try to get the jitters out and try to play as many people as you can, see what they can and can’t do so it was kind of expected. I thought we played much better this match than we did last match,” Herron said.

Maxwell was ecstatic about beginning the season with two wins.

“I think we had giant expectations, and there was a lot of pressure put on our backs. I think we handled it pretty well,” Maxwell said.

Washburn won the early game against Quincy University 3-0. The Ichabods had three wins under their belt in the tournament before playing Central Washington University, where they came out on top at 3-1.

The Ichabods hit the road for Durango, Colorado, for the Skyhawks Invitational Tournament Sept. 13 and 14.