Review: “Men Who Stare at Goats” 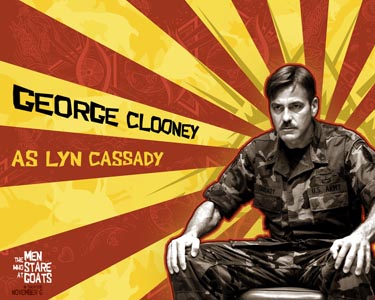 After several weeks of busted cars and bad movies filling the theaters, I was almost thrilled to be back in line on a Friday night behind the woman who wanted to use a coupon she printed off that required a manager to inspect during peak box office hours. Almost.

“The Men Who Stare at Goats” caught my interest first because I read an interview with the author of the book it was based on, and second because the cast and advertising made it look a lot like a Coen Brothers project (it wasn’t).

The movie starts with the preface “You’d be surprised how much of this is true,” which can be a little misleading since most people do not know that while the government program it revolves around did exist, and most of the techniques described were really part of it, and the man who wrote the original book was a reporter, the book itself is fiction. Something the filmmakers did not feel the need to point out until halfway through the end credits.

The movie tells two stories; first of reporter Bob Wilton, played by Ewen McGregor, who stumbles on a former soldier of the First Earth Battalion named Lyn Cassady (George Clooney) when trying to get permission to cross the border to Iraq. While Wilton follows Cassady on his dubious mission, he listens to him tell the story of Lieutenant Colonel Bill Django’s  (Jeff Bridges) attempt to create soldiers with superpowers.

Although cast fantastically with a terrific story to work with, “The Men Who Stare at Goats” seemed a little unsteady under the arguably inexperienced writing and direction of Peter Straughan and Grant Heslov, respectively. The latter part of the movie lost the skeptic hilarity of the whole concept to a doe-eyed innocence and belief that the failure of the original First Earth Battalion was due to Larry Hooper (Kevin Spacey) and his jealous attempt to steer the project in a darker direction.

It ignored the fact that none of these people had developed the ability to turn invisible or walk through walls. In addition, the continuous use of the term “Jedi Warriors” in the presence of McGregor is simply played as if the Star Wars prequels he starred in do not even exist (something many of us have tried to do ourselves).

“The Men Who Stare at Goats” was a little weaker than I had hoped for, relying heavily on the cast to make it work, but they do. Despite a slightly indecisive stand on the concept that the movie is based on and a sharp downhill slope in the last ten or twenty minutes, the bulk of the movie was still quite entertaining and kept you laughing at almost everything the soldiers in the First Earth Battalion tried.