RoadRunners finally back in action 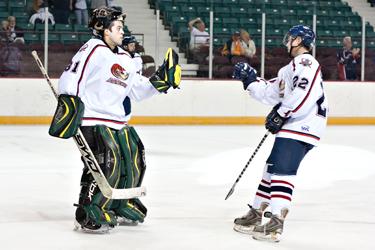 Fall break The Topeka RoadRunners took a week off last week after a tough stretch against the St. Louis Bandits (13-3-2) where they went 2-1-0. The 'Runners next face the Wichita Falls Wildcats, a fellow member of the NAHL's South Division, and will follow that up with Washburn Night on Nov. 20. Photo by Chris Hamm.

Richard Kelly
The Topeka RoadRunners could probably conclude they’re over the biggest hump so far this season.
Going into a weekend in which they would face their toughest test of the young season so far, the RoadRunners prevailed in two of three games in Chesterfield, Mo., against their divisional rival, the St. Louis Bandits (13-3-2). The games took place during the weekend of Oct. 30-Nov. 1. They won Friday’s contest 3-1 and followed the next night with a shutout to win 2-0 before dropping the Sunday contest 5-2.
Eric Rohrkemper, who Topeka brought in when goalie Cooper Frederick went down with an injury, got the shutout Saturday. It was his first of the season.
The previous weekend, the team played one of the weaker teams in the league, the Albert Lea Thunder, but R. J. Enga, Topeka assistant coach, said they transitioned well.
“St. Louis is obviously the benchmark team that you play and they’re always good,” said Enga. “To take two out of three, I think anyone would be happy, let alone against a top-end opponent like St. Louis.”
The RoadRunners have had this past week off and have used the time period to allow players to take care of injuries and get rest. Enga said he believes that will be valuable for the team.
“It’s the perfect time [for players to rest],” said Enga. “Three game weekends are tough on the guys. With the level that we play—three times in a row at that level—anyone that’s banged up or dinged up, it will give them an extra week here to heal up.”
But despite such a strong record so far this season, Enga said the team will have to continue to battle every game and can’t take a weekend off just because an opponent isn’t the caliber of a tougher team like St. Louis.
As the RoadRunners look to continue to build off their strengths, the team hopes to see a continuation of their scoring output. At this point, no player has taken the lead role as top goal scorer for the team, but a plethora of players are contending for the top spot. Much of that can be related to the work the team puts in, but also because of how the players seem to be able to get along, said Enga. The RoadRunners next games are this weekend at home against the Wichita Falls Wildcats, who are also in the South Division. Puck drop is 7:05 p.m. for both.
Following this weekend’s games, the RoadRunners will return to action Friday, Nov. 20, and Saturday, Nov. 21, against the Springfield Jr. Blues. Friday will be Washburn Night for students and will include free tickets and T-shirts while supplies last. RoadRunner players will be at Washburn on Wednesday, Nov. 18, and Thursday, Nov. 19, from 11 a.m.-1 p.m. handing out tickets to students.
Delete Image
Align Left
Align Center
Align Right
Align Left
Align Center
Delete Heading