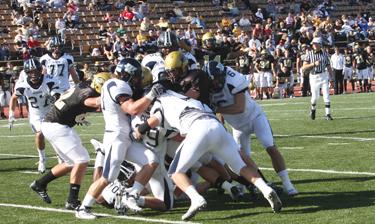 Hornets swarmed Despite an impressive 56-35 win against rival Emporia State on Saturday, Washburn is not going to the playoffs. Nebraska-Omaha and Missouri Western, both 6-3 in the MIAA, will represent the conference in the Kanza Bowl and the Mineral Water Bowl. Photo by Matt Wilper.

The 2009 football season was one of extreme highs and lows for Washburn, ranging from a 52-point blowout against Pittsburg State on Homecoming to a three point loss to Northwest Missouri. It only seems fitting to end it in similar fashion.

Less than 24 hours after an explosive 56-35 win against rival Emporia State in Emporia, the Ichabods suffered a tremendous letdown. The Bods had been ranked ninth in the Super Regional Four, of which six teams qualify for the playoffs. Four teams ahead of Washburn lost: No. 3 Tarleton State, No. 4 Abilene Christian, No. 5 Missouri Western and No. 6 Central Missouri. Six teams qualified—Washburn did not.

“It’s hard to say when it goes to a committee,” said Craig Schurig, head coach. “You’re relying on different voices and different people analyzing different things. We’re kinda putting it in the hands of someone else. We obviously felt, as a coaching staff and as players, that we finished very strong and we had the credentials to really be evaluated strongly for the playoffs. That didn’t work out, so we’re disappointed.”

Schurig said while two of Washburn’s three losses were very close and somewhat controversial, one game stood out in his mind as a reason they didn’t move on to the playoffs: Nebraska-Omaha.

Schurig was disappointed in himself for not preparing the team better, and the team was unable to play to its capability. That one game may have played a large part in the next disappointment for the Ichabods.

“The only way I figured we’d get in the playoffs is if Missouri Western made the playoffs, and then the bowl game was a real possibility,” said Schurig. “The way everything ended up unfolding, it was kind of a rare circumstance that happened and it knocked us out of the bowls, too.”

With Northwest Missouri gaining the automatic playoff bid for winning the MIAA conference, no other MIAA school was picked by the selection committee to compete in the playoffs.

“The committee chose to go with three Texas schools, which that’s the first time that’s ever happened,” said Schurig. “We [the MIAA] were shut out.”

With all hopes at postseason play eliminated, Washburn must now focus on rebuilding for next season. Schurig said the Ichabods will be losing a lot of great seniors, but the program is always full of young players willing to step up.

One area of concern in particular for Schurig will be rebuilding an imposing defense, three members of which he said were receiving a lot of attention from NFL scouts: Zach Watkins, Brandon Jackson and Eric Lawrence.

“We have to replace some very good defensive players and add some depth there, but I would anticipate us being a very competitive team next year,” said Schurig. “Hopefully, we’ll get it done to where we’re not leaving a decision up to a committee, and we’re an automatic qualifier.”