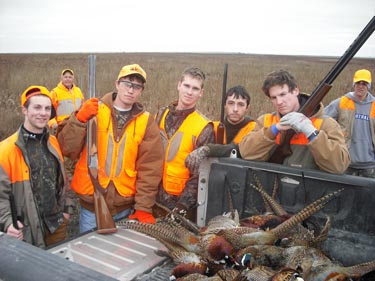 Walking through the tall, thick brush on a chilly November morning in Western Kansas, Garrett Love is pheasant hunting. Out of nowhere, a pheasant jumps up right out from underneath him. It flies into the air, and Love immediately shoots it down.

For him, spending time with his loved ones out in the fields hunting near his home is truly a great pastime.

Love, who’s been hunting since he “could hold a gun,” recently went out on opening day for pheasant hunting for the first time in four years, something he was able to do since he’s not playing basketball for the Ichabods.

“Everyone wants to make it out for opening weekend,” said Love. “We enjoy it, getting to spend that time with those friends and family because you don’t get to see them that often.”

On that day near Montezuma, in what Love calls an area that has “the best pheasant hunting in the world,” he and a group of 36 others including Washburn student Michael Glass and alumni Reed Howard, Tim Mathias and Charlie Ross, shot 120 pheasants in just a few hours.

Mathias, a 2009 graduate of Washburn who is originally from Hutchinson, is familiar with hunting, having gone out for geese, duck, deer and turkey.

He said he enjoys hunting “just for the thrill and excitement and just being out there with a bunch of guys doing man things.”

“That’s when everybody’s out, lots of gunshots,” said Mathias. “It’s an adrenaline rush when you first start.”

Both Mathias and Love said they shot the max limit of four pheasants, and Love said it kind has been a goal to do that every time he goes out.

While limiting out is not a real challenge for Love, a challenge did arise recently on another trip back home over Thanksgiving break.

A bird was coming toward the group from a good distance away and was high up in the sky. Love saw it coming and prepared to take it. While most shots are straight aims from closer range, this one required some leading because it was so far away.

“You see those ones, then you have to measure is it close enough yet and look at your range, is this going to be a good shot? Am I just wasting shells?” he said. “You want to have a Hail Mary, a full-court shot, and every once in a while it goes.”

However his adventure was not over.  As he was running to get the first, another comes into his eye, not nearly as high in the sky but just as far. He took it down, and was very happy to have shot a two-bird combo in several seconds when pheasants can be hard to come by.

“There’s days where you may go a full day where you may only get three shots,” he said. “It’s not often that two of them fly up at the same time.”

Love said his skill as a hunter has increased in recent years because of a big switch he made with his hunting technique.

“I’m right-handed but my left eye is dominant and it’s a lot stronger than my right. So I made a transition of hunting with my right hand to my left,” said Love. “Obviously, it’s like anything going from your right to your left, but once I’ve developed it, it’s been better for me because my left eye is that much better. So it stepped up my game a little bit once I got that down.”

Overall, Love said while his family isn’t the most hardcore pheasant hunters, it does allow for great fun, good eating and just great bonding time.

“Western Kansas doesn’t get better than that,” said Love.