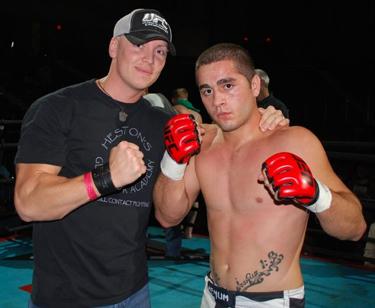 For some, the holidays can be a hellacious time of year. This Saturday, at the Kansas Expocentre, it almost certainly will be.

Holiday Hell, a pro boxing and mixed martial arts event at the Expo, will include fighters from Danger-Fire, United Martial Sciences and Heston’s Gladiator Academy. Doors open at 6 p.m. and the fights begin at 7, with tickets starting at $21.

Scott Heston, a former Washburn student, will be the feature MMA bout. He runs Heston’s Gladiator Academy and has trained several fighters competing Saturday, including a woman. Heston teaches a beginners class at the Shawnee North Community Center Mondays and Thursdays from 6-8 p.m., and offers the first two lessons for free.

With a 5-1 amateur record (he was diagnosed with pnuemonia prior to the loss), Heston will be making his pro debut Saturday. This is Heston’s first fight in Topeka as an MMA fighter.

“I am excited,” said Heston. “An MMA fight is always nerve racking, you know. For months, weeks, days, hours, minutes, then finally seconds you are about to be locked in a cage where someone who is trained is going to try to hurt you as bad as they can.”