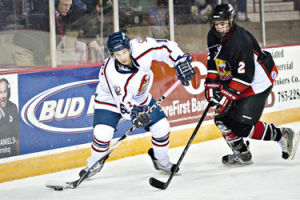 ?Over the break I had the opportunity to spend two weeks in Germany with a good friend of mine. I’ve travelled before, so I am accustomed to airplane flights, waiting in line, trying to communicate with people from other countries, and trying to blend into another culture. I find it a great compliment when a local confuses me for someone who actually knows what they are doing, and asks me for directions. I didn’t blend as well as I thought I might.

?Naturally, I went into “world traveler mode” in Germany – standing very erect, keeping my hands in my pockets or straight down at my sides, avoiding eye contact, smiling at no one and speaking very quietly. And I wore black as often as possible.

?In New York or Chicago, this would have been a perfect formula for successfully blending in with the locals. In Berlin, this was not the case.

?First off, Germans will look at you. They will stare at you for about two seconds, and then look away without changing facial expression at all. In America, you generally don’t stare at people. Or if you do, you try to do it discreetly. On the offchance that you get caught looking at someone, acknowledgement in the form of a smile, nod or wave is a must.

?It took me nearly a week to shake the acknowledgement habit. I probably nodded or smiled at more than 15 people, and had been answered with only one nod. And that was probably from an American.

?Finally, when I had figured out German Staring, I put it into practice. It is actually kind of fun. And what’s wrong with looking at people in public places? They’re practically asking for it.

?Next, my choice in clothes was not quite right. No German wears a pea coat. To keep warm, they prefer to wear about three or four layers of long-sleeved T-shirts, and then six or seven sweaters on top of that. Okay, only about two sweaters. And if they’re cold, they don’t say anything, they just turn pink and look miserable. Or they smoke.

?My next glaring non-German trait was my big, fluffy, curly hair. Germans either have short hair, or long straight hair. And if I had wanted to look really cool, I would have had my hair done in the style I dubbed the “Mo-Mo” – that is, the mohawk-mullet. It’s a short fauxhawk with a long flowing drape in the back. Party in the front and in the back – no business about it.

?As I walked through the streets of Berlin, I knew that people could tell I wasn’t German. I didn’t walk like a German, I didn’t dress like a German, and even though my name is 100 percent German, I still spoke with an American accent.

?It wasn’t until my friend and I met up with another American that I understood why I just couldn’t hack it as a fake German.

?I realized that if I tried hard, I could probably blend in with looks, language and dress. I could walk and stare and smoke like a German – but I would never truly be German.

?In trying to blend, I was doing my best to respect German culture. I had tried so hard to respect the culture that I had almost lost track of my own.

?Some German things, like staring, are easy to adjust to. Others are never going to make sense to me. I will never understand Germany as a German would, and I shouldn’t try to. The best I can do is try to understand the culture through what I know.

?When I understood this, I was at ease for the rest of the trip. I was as respectful as possible, while staying true to my American roots.