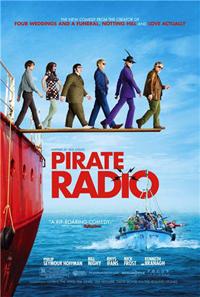 When I scanned over what was new in theaters this week, a little worried my only option was going to be “2012,” Roland Emmerich’s latest attempt to prove a large enough special-effects budget can compensate for a lack of interesting characters or plotlines, I stumbled upon “Pirate Radio,” a surprisingly unnoticed movie by Richard Curtis (“Four Weddings and a Funeral,” “Love Actually”) about a ship broadcasting rock and pop music from the sea to avoid British laws in the 1960’s that prohibited it from being played.

The ads for “Pirate Radio” also boasted a soundtrack with some of the most well-known British rock bands of the era which included the Rolling Stones and The Who, personal favorites of mine. Stacked on top of that were actors like Philip Seymour Hoffman, Bill Nighy, and Nick Frost (the overweight sidekick in “Shaun of the Dead” and “Hot Fuzz”) it made me sad to think this movie was not getting much attention.

That opinion, unfortunately, changed significantly after I saw it. Aside from the occasional scene to poke fun at the up-tight bureaucrats trying to shut them down while living hideously dull lives themselves, there was no real plot or conflict that arose from it. The antagonists had no direct interaction with the people on board the ship they were trying to shut down and really effected what happened for the three minutes or less it took the crew to outwit whatever they just thought up.

With such meaningless villains you would expect the main conflict of the film to be driven inward towards the interaction of the different radio personalities through the eyes of newcomer Carl, sent to stay with his godfather Quentin (Bill Nighy) after getting kicked out of school. While the various antics of the crew did keep you laughing throughout most of the film, they didn’t really run together into anything substantial.

I could have made an allowance for such an absent storyline since this was a movie about the music, but as it turns out I could not even have that. Much of the music played throughout the film was released well after the time period “Pirate Radio” was set in, and the major British rock bands it boasted turned out to be a few songs from each that were indistinguishable, if different, from the existing recording used in any other movie that bought the rights to use it.

Overall, I just found “Pirate Radio” to be a tremendous disappointment. With the content, cast, and writer/director this movie was given there is just no excuse for it to have turned out so badly.