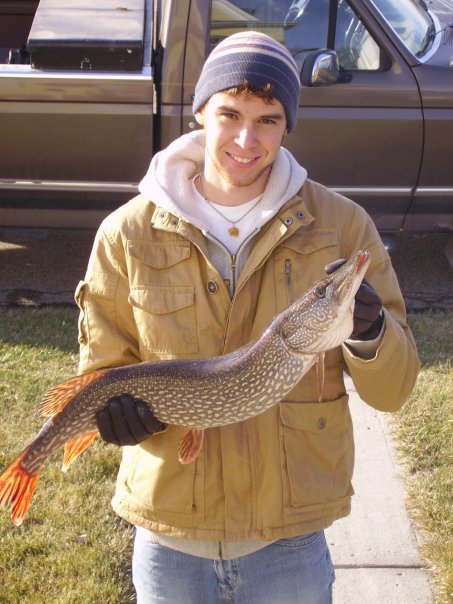 Thanksgiving in North Dakota was cold as it hung just above freezing so needless to say I was a little bit surprised when my uncle asked if I wanted to go hit the water for a little while.

I personally thought it was far too cold and there would be a thin sheet of ice. He reassured me, arguing that it had been windy. So I got my gear, which I carry with me at all times, and we headed down to the local fishing hotspot known as The Canal.

The Canal is simply an irrigation canal off of the James River that is roughly 30 feet wide, goes for about half a mile, and from what I could tell gets about 12 feet deep. The bottom is littered with tumbleweeds and by about late fall all other vegetation that might have been growing in it has almost completely died off.

Now as to why the fishing in The Canal is so consistent I have no idea, but what I do know is that the next time I go back I’m putting better line on my rod. Not only is it consistent, but the fish are quality size. It’s not uncommon according to some of the locals that were there to pull an 10-15 pound pike out of there. Now if that doesn’t make you nervously look down at your bail that has been spooled with 10 pound test line, then I don’t know what does.

I decided to start out casting with one of my favorite big fish lures, a half ounce Booyah double willow leaf spinner. Within the first 20 minutes I had hooked up to a solid fish, it started stripping drag like I had a freight train. After a short fight I had the fish netted courtesy of my uncle. At seven and a half pounds and 30 inches he was pretty impressive, especially considering the next biggest one I’d managed to land was about 20 inches and in Canada.

So if you’re looking for some quality pike fishing and don’t feel like forking over an arm and a leg for Canada, or fighting the crowds in Wisconsin and Minnesota, North Dakota is definitely a viable option.