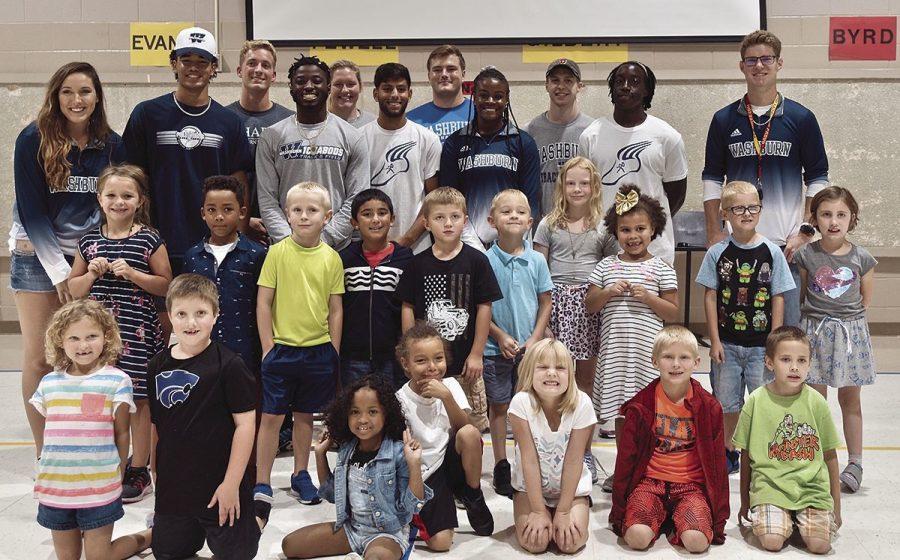 Role Models: Students at Wannamaker Elementary pose with Washburn track and field student athletes after a pep rally. Student athletes from a variety of sports volunteered at local schools the previous week.

Before the fall games kick off for Washburn’s athletic teams, student athletes have been participating and volunteering in various community events.

Shelby Edwards is a junior public relations major and a member of Washburn’s track and field team. Edwards has been on the team for three years now, and is a two-time All-American javelin thrower. Edwards took first at the 2019 MIAA Outdoor Championships and third at the NCAA Outdoor Championships, setting Washburn’s new school record in javelin with a throw of 49.62m.

Edwards believes it’s important to engage with youth in the community, who may be future collegiate athletes themselves.

“It’s always a good thing to give back and get younger people involved because your future is in your youth. So just putting that spark there, like ‘oh, I could be a college athlete someday, too,” said Edwards.

Paul Haase is a senior international business and finance major. He is an international student from Germany, and he is a member of the men’s tennis team.  In 2019, Haase and his partner Alejandro Plaza placed third at the national D2 men’s tennis tournament.

Haase thinks student athletes should go to schools more often to meet kids and inspire them.

“I really enjoy the volunteer work. I feel that it’s something we should definitely do more often. It’s fun to be with the kids and see the glow in their eyes. I feel like they really enjoy all of the people coming to their schools,” said Haase.

Bradley Eidenmueller, junior business management major, is also a member of the men’s tennis team. He has been a member of the tennis team for three years. His Washburn career overall records are 38-18 in single matches and 22-13 in doubles.

Eidenmueller reflects on his status as a role model for younger kids. He enjoys seeing how happy kids get when they meet collegiate athletes.

“It’s really cool to see how happy they are when they get to see us in a different environment. We’re just tennis players, but when we come here, it’s like ‘wow, they really look up to us.’ We’re role models and treated like celebrities in these schools,” said Eidenmueller. “It’s cool to see how we can be a positive influence on them.”

Many students from the fall athletic teams attended school events to meet Topeka youth. One belief was unanimous among the athletes: how important and meaningful it is to engage with younger generations.

Support Washburn’s athletic teams by attending home events and congratulating them on their accomplishments throughout the season.