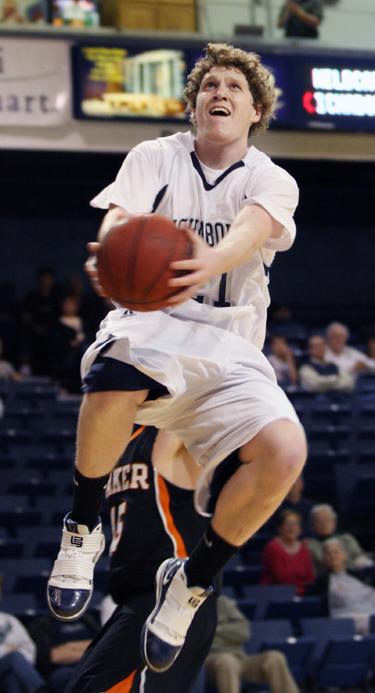 Home-grown talent Freshman guard Bryce Simons may face a daily struggle with diabetes, but he hasn’t let that deter him. Simons is averaging 4.0 points per game and has eight steals.

After being sick for 10 days at the age of 6, Bryce Simons knew something wasn’t right.

After testing had finished, it was discovered Simons actually had type-1 diabetes. It wasn’t necessarily hereditary for Simons’ family, but it was a reality for him. And from those early points, it wasn’t always easy to adapt.

“At first, I had to check blood sugar a lot,” said Simons. “It was kind of weird at first. But then, after about a year or so, I was pretty comfortable with it.”

Fortunately, for Simons, he had a good family doctor who helped explain the situation to both him and his parents, he said.

Through elementary, middle and high school, Simons ended up only having one true incident that showed he was living with diabetes. At a fairly young age, Simons did suffer a seizure that left him unconscious and eventually in the hospital, but he soon recovered and hasn’t dealt with many other major setbacks.

While it would be easy to think it has stopped Simons from at least certain activities, it has not. The freshman Ichabod was a standout at Seaman High School in basketball and is now playing under head coach Bob Chipman at Washburn. He’s always been determined not to let diabetes slow him down, thanks in part to the ever-advancing technology on treatment.

“It’s actually pretty easy to handle nowadays,” said Simons. “They have technology that will tell my blood sugar level in seconds, so that really helps.”

Even with technology, Simons still has a fairly expansive pre-game and in-game routine. Usually Simons will check his blood sugar levels three to four times prior to game time and must take a pill made of vinegar that keeps his levels where they’re at 20 minutes before the game. During the first time Simons leaves the game in the first half, he also checks his levels, as well as at halftime.

Despite all the mandatory level-checking though, Simons has made sure his faculty and coaches understand his situation. He also knows as technology progresses, it will make it easier to continue treating it.

“I think every year they come out with something new to help deal with it,” said Simons. “They’ve been talking about the cure for it. Technology has really advanced.”

Knowing he can make it through has come to Simons quite naturally based on his surroundings. When he was a freshman in high school, he played with a senior on the team who had cancer who then went on to play basketball at Youngstown State in Ohio. With that in mind, Simons offered a word of advice for anyone else who suffered from a disability that could hinder them in their opportunities.

“If I can make it through, so can anyone else,” said Simons. “It’s just a matter of perseverance. People can make it through anything if they just keep with it. If that can be an inspiration to anyone, I think that’s just really great.”