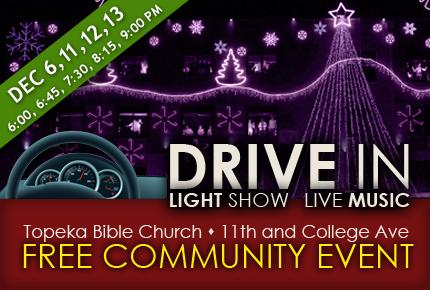 The Topeka Bible Church is located at 1101 SW Mulvane Street. The show runs through Dec. 6-13.

Men were seen scaling the south wall of Topeka Bible Church just weeks ago. The three-story building was being prepared for an event that will take place in December. A super-sized grid was hung to attach a series of traditional Christmas lights, rope lights, and large lights that resemble snowflakes, Christmas trees and other festive shapes. This process alone took 80 hours of time using a lift.

The purpose of this labor – Topeka’s third annual Christmas Light Show at Topeka Bible Church. Bryan Nelson, the man in charge of this event and the worship arts pastor at TBC, started preparing a full year in advance.

“The process of preparing is year round,” said Nelson. “However, things really get ramped up in October.”

Nelson was hired on TBC’s staff in May 2007 and has done his part in making sure that Topeka has something to do right when the Christmas season begins. The first year was hard to prepare for because he had to figure out how seven windows on this wall would be filled with musicians and seen from the parking lot.

“There are a series of LED flood lights in each window,” said Nelson. “There are also black lights that cause our musicians to glow in the dark with special tape on their clothing.”

Every musician plays into a live microphone and cannot hear each other because walls separate them inside the building. The art of getting them to play three songs at the same time has been mastered with two years of experience and a click-track that plays through each musician’s headphones.

“Spectators still think the musicians aren’t really playing their instruments or singing in the windows,” said Nelson. “They are playing live.  If someone makes a mistake, you’ll hear it.  The only prerecorded part is the narration between songs.”

Nelson is really excited about the songs and the narration this year. The play list, in this order, is “We Three Kings” with “Kashmir” by Led Zeppelin, “What Child is This?” by Third Day, and “Wizards in Winter” by Trans Siberian Orchestra. Charlie Summers, a local radio talent, recorded the narration script for this year’s show.

Nelson said that this show would not be possible without every volunteer taking time out of their schedule to be a part of this experience. “Those who make themselves available to volunteer during the day are critical to the process,” said Nelson. “Several people take vacation days from work to help, others are retired, and others are students in the middle of a busy school season.”

Though Nelson spends much of his time each holiday season tending to the needs of the light show, he makes sure that he is always putting his family first. He has a wife and two young children who are very supportive of his role in the light show, and his 5- and 3-year-old kids dance to the music at home months before the show even begins.

“I can’t figure out if they enjoy the music, the lights, or the glow-sticks the most,” said Nelson.

Nelson originally got the idea for the light show because he wanted something to happen in Topeka that was “radically different” from anything this town had seen before. He thought that live musicians in windows synchronized to holiday lights and heard via low-powered FM radio, all in a drive-in format, would be a way to accomplish this.

“We felt this was different enough that it might be something people would enjoy,” he said.

The light show is only 15 minutes long, but Nelson suggests that each vehicle shows up 20-30 minutes prior to the show time. The light show is completely free of charge, and Nelson said that no donations will be accepted.

Last year, a total of about 4,000 people attended the show. Nelson wants this year’s guests to reach and exceed 6,000. If there is a higher demand for more show times, Nelson said that the show would move to a bigger location next year and the years to follow.

Nelson said that there are two reasons why the Christmas light show is a great event to attend.

“First, it’s simply entertaining,” said Nelson. “It’s fun, high energy, different, and short.  Lasting only 15 minutes, it’s an experience that everyone will remember. Second, we’d like the opportunity to tell people about why Christmas is celebrated today.”

The light show is hard to miss if a car reaches 10th and College during the shows run. Nelson said that the parking attendants will be waiting there in bright attire giving clear directions for all visitors.

The Christmas light show has been tailored to everyone. It’s family-friendly yet exciting enough for people of all ages.

“Not only is it a fun evening for a family,” said Nelson, “it’s a great date night for couples, too.”