The cost of higher education: 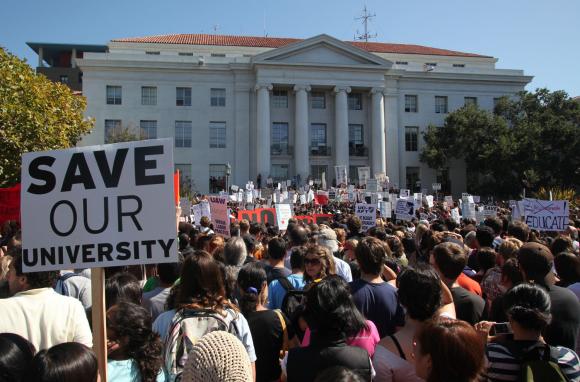 Students gathered at The University of California- Berkley on Sept. 24, 2009 to protest tuition increases as a result of state budget cuts.

Higher education institutions in California are facing significant tuition increases, leaving other universities left wondering if the same thing will happen to them.

The current economy has taken its toll on all state schools, but most notably at state schools in California. Recently, the University of California Board of Regents approved a proposal to increase tuition by 32 percent starting in the fall of 2010 due to a lack of state funding this year. The state’s universities simply cannot keep up with all of its programs without help from funding.

“As far as I’m concerned, we can’t have our cake and eat it too. There can’t be programs that desperately need funding available and no tuition increase,” said a UCLA senior, Robben Beckman, who is also a member of the Blue and Gold Club. “You either want programs or you don’t. You either want to pay for luxuries or you don’t. You don’t get both.”

Protesters in California don’t see it in the same light as Beckman. They believe their education is being put into jeopardy. With the tuition increase, many students don’t know how they are going to afford it.

With increasing student diversity and the constant creation of more university clubs and activities, funding is not always available for every program. With restraints on the state of California’s budget, education took a cut. The solution, without cutting any programs or clubs, was to increase the tuition.

Despite the state of California having set tuition level trends in the past, its education department is in such bad shape, it will not necessarily affect other state schools. Washburn University will most likely never see an increase in tuition like the 32 percent California schools are facing.

“Washburn probably won’t see a large increase in tuition because of its diversified revenue base,” said Rob Weigand, finance professor at Washburn. “We receive the least amount of funding from the state than any school in Kansas.”

Washburn receives funding from three main sources: local sales tax, a state operating grant and student tuition. Although Washburn does rely partially on state funds, it is not a deal breaker if funds are cut for education. Washburn is known for providing many scholarships to its students, recently as much as $5.8 million, and comes without help from other resources.

“Washburn students have an advantage right now because [the school] is funded less by the state. Washburn still has the money to give scholarships to students and that could be a big draw toward Washburn,” said Weigand.

With the economy still down, Washburn may start looking like the place to be to prospective students as tuition does not expect to increase and scholarships are still plentiful. Weigand said that over the next five to ten years Washburn looks to be in better shape than other Kansas schools, in large part because of funding structure. Washburn could be looking at a big increase in enrollment, another factor that reduces the risk of tuition increases.