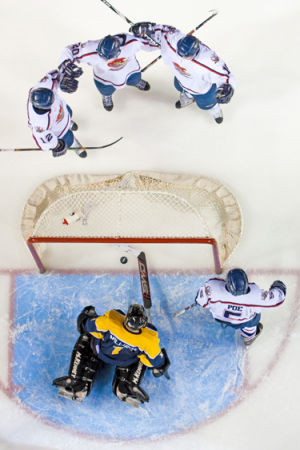 It was safe to say the Topeka RoadRunners had the blues after their Friday night match.

Although a furious onslaught came close to tying the game late in Friday night’s contest, the RoadRunners 11 game win streak was snapped in a 3-2 loss to the Springfield Jr. Blues at Landon Arena.

Being outshot 11-2 in the first frame, RoadRunner’s coach Scott Langer was quick to point to a rough first period in being a main problem in the defeat.

“That’s what caught up to us there was our lack of interest in the first period,” Langer said after Friday’s game. “It was probably the worst first period I’ve seen since the team’s been here. You can’t always think you’re going to play a couple periods and win a hockey game.”

Topeka outshot the Jr. Blues 38-18 in Friday’s match, but after tying the game early in the second period and taking the lead near the beginning of the third period, Topeka surrendered two goals midway through the last frame and just couldn’t find the back of the net to force the game to overtime.

In closing Friday, Langer said that he expected a tremendously better effort out of his team Saturday night.

Langer’s comments couldn’t have been more spot-on as Saturday’s contest began. A high-sticking double minor sent Springfield’s T.J. Poganski to the penalty box just over a minute in and Topeka capitalized with goals by Tony Thomas and Edgars Lipsbergs to put the ‘Runners on top 2-0 less than four minutes into the contest.

An early third period fight between Topeka’s Alec Hagaman and Springfield’s Wally Cossette sent the two to the penalty box with blood left on the ice. Only minutes later, Topeka scored its fifth and final goal of the evening when Tony Thomas scored on the powerplay. The Jr. Blues would add a goal halfway through the period, but with a shot count of 38-23 and a 5-2 margin on the scoreboard, the RoadRunners would win Saturday night to move to 29-6-3 on the season.

Next Friday and Saturday night, Topeka will return home for a match-up against the South Division rival St. Louis Bandits, who are 28-5-1. Friday night is College Night and puck drop both nights is 7:05 p.m. Langer knows this weekend series will be crucial and that this year’s South Division race may come down to these two teams.

“It’s certainly at this point shaping up for that. The past says that you got to get through St. Louis, so we’re hoping to have a shot at that,” Langer said.

Tony Thomas, who had two goals and two assists in Saturday’s contest, knows as well this weekend will be a chance for each team to prove themselves.

“We’re really looking forward to that one. That’s going to show who the real power house in the South Division is, and we really think we got the team to get it done and that’s what we want,” he said.