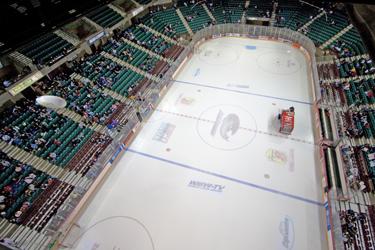 Weekend warriors The Topeka RoadRunners return home this weekend to take on their divisional rival, the St. Louis Bandits. Friday is also ‘College Night’ and will feature $1 beer.

This Friday night has officially become “College Night” with the Topeka RoadRunners.

There’s sure to be a buzz in the air Friday evening when the 29-6-3 ‘Runners will be taking on the rival St. Louis Bandits at 7:05 p.m. at Landon Arena, with all students receiving 10 percent off ticket prices with a student identification card. While the deal is usually limited to students at Washburn, Friday’s discount includes all local community colleges, technical schools and major universities.

Tiffany Logue, account executive for the RoadRunners, said the night will be “focused around colleges” and the team is trying to offer another avenue of entertainment for students, rather than the usual weekend activities.

“We want it to be loud and crazy,” said Logue. “This is a big series and we need to have people rowdy to help get the team fired up.”

The game festivities will include a dance-off during first intermission between the RoadRunner Ice Girls and students, as well as college students’ ability to help clean up chuck-a-pucks during second intermission and $1 beer for those in attendance over the age of 21. During media timeouts, there will also be college-themed festivities.

Tickets for Friday’s game start at $9 after discount for students and groups of ten or more can receive a group rate, which would take another dollar off ticket prices, making the cheapest tickets $8. Logue said group tickets must be purchased by Friday at noon and can be done by calling 785-286-7825(PUCK). Also noted is that parking is $5 per car.