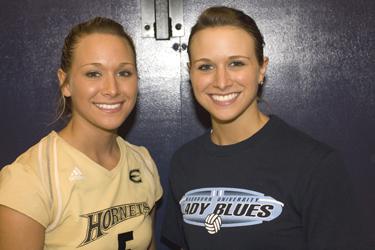 It’s not every day twin sisters play at rival universities in the same sport and must face one another twice a season.

Yet that’s exactly the situation Ashley and Arica Shepard find themselves in today.

Although the two women are quite different in their interests, a mutual love for volleyball has come quite naturally for both. So, when Ashley decided to attend Washburn after graduating from Rossville High School, while Arica went to Emporia State, both with the intention of play volleyball, it left each wondering how it’d be to face one another at the college level. The face-off was intensified with both being  an outside hitter for their school. Arica had mixed feelings playing her sister in college.

“Being her sister, I definitely had my times on the court where I wanted her to be successful, but at the same time, I wanted to do well too and I wanted my team to do well too, so it was a little difficult sometimes,” said Arica.

But after graduating from the same high school, Ashley explained what drew them to separate universities.

“If we went on family vacations and were around each other more than like five days, we’d probably kill each other,” said Ashley.

She went on to explain that after doing so much together before college, the two just needed time to grow separately, because of their differences in personality.

As college volleyball progressed for each it became a fairly calm matter for the two sisters to play one another on the court. For the parents though, the problem of cheering for and against their daughters was a reality. But while one would think parents would agonize over how to cheer for each daughter, the matter was solved quite simply.

While Ashley, a junior due to a medical redshirt, still has one more year of eligibility, Arica has now completed her senior season. Each has thrived in their collegiate volleyball careers and although Arica will no longer be playing her sister, she does expect to attend most of her games.

The two have now begun being connected elsewhere. Recently, Arica has begun an internship helping Summer Harris, who is the marketing and tickets coordinator at Washburn. She had attempted to pursue the same role for an internship at Emporia State, but the situation did not pan out. With that occurring, Ashley, who had worked with Sports Information over the summer, helped her get connected with Washburn.

And while they will not face one another on the collegiate level again, the two do plan to continue playing volleyball recreationally together for some time into the future.

“I think since volleyball has been a big part of our lives for so long, after about a year break, we’re going to miss it. I definitely see us continuing to play,” said Ashley.