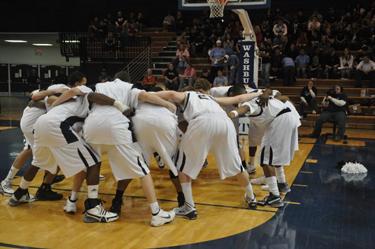 The Washburn Ichabods (10-8, 4-7) were victorious Saturday night against Nebraska-Omaha (14-4, 7-4, third place in MIAA), winning 60-49. The Bods have a tough road ahead of them before the MIAA tournament begins March 5.

Led by junior forward De’Andre Washington, who had a double-double with 19 points and 12 rebounds, the Ichabods overcame a bad shooting night and a much more athletic UNO team to get the win. Shooting 22-66 from the field, including 4-20 from the three point line, the Ichabods were blocked nine times and were victims to a demonstrative alley-oop. However, the Bods managed to outrebound the Mavericks 46-41 and actually shot a better percentage from the field, with UNO shooting 17-57.