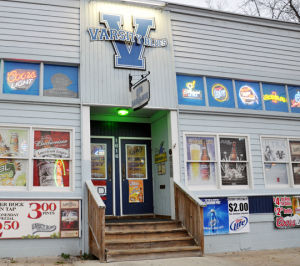 With a new name and a new owner, the bar formerly known as Varsity Blues is looking to become a first stop of Washburn students and College Hill residents.

Part of that plan was a change in the name. At a tasting of a new menu a few weeks ago, new owner Page Dickeson asked people to suggest names for the bar. The final name was a combination of suggestions.

“The new name is going to be College Hill Tavern,” said Dickeson.

But the new name is far from the only change Dickeson is looking to implement. Kim Galey, the former owner of the bar, said she is ready for a change of place. She will take over the kitchen, creating a new menu that will offer a fresh look at bar food.

Barbecue is being removed from the menu. Taking its place will be steak, fish, salad and pasta. They also will be adding fast items, so that students and others crunched for time can stop in and have a quick meal. The specials will change for food and drinks, and the tavern will offer an all-you-can-eat wings night. Beyond that, Washburn students and College Hill residents will receive a 10 percent discount on food.

“I feel the changes are positive,” said Galey. “We will make it so that you don’t have to go the west side to have a nice steak or fish.”

Another big change that is already in place is the televisions in the bar. Dickeson was told by Cox Cable that she now has one of the larger television input systems in a Topeka establishment. All the televisions are in high definition and flat screen.

“We want to make this your place to watch the games,” said Dickeson. “We will be showing the March Madness games.”

Dickeson wants to make College Hill Tavern very student friendly. She explained she feels that the university is an important part of the area, and that students should be able to find great entertainment close to campus. She also feels that it would be great to help student groups and organizations raise money.

“We would love to help student organizations that want help raising money,” said Dickeson. “We would love to host fundraisers, have students tend bar for a night to raise money or have music students come in and play and collect donations.”

Patrons of the new College Hill Tavern are enjoying the changes Dickeson has been making, but are glad that the atmosphere hasn’t changed too much.

“The new owners are doing a very good job,” said Paul Schroer, a first-year Washburn Law student. “They are attracting new business and still keeping loyal customers happy. I was worried about what changes would be made, but it feels like the same old Varsity.”

There is Extreme Trivia on Thursdays at 7 p.m. and karaoke on most Fridays. Soul Rebel and the Beast, a local reggae band, will be playing on Feb. 20. The Phaetons will be playing at the bar Feb. 27.

Galey said that last year they were called the pre-parade headquarters. They will open early for breakfast that day, and will have bangers and mash as the food special that day. They will also be offering $3 Irish car bombs, $3 green aluminum bud light and $3 nutty Irishmen shots.

“It’s an inviting neighborhood bar,” said Galey. “At larger bars, I feel you don’t get the same friendly service. There is a variety of people. Everyone is always welcome.”