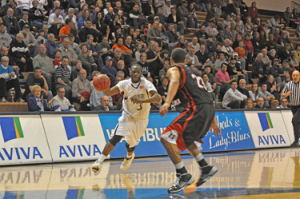 To overcome the misfortunes they suffered early in 2010, all the Ichabods needed was a little Mo.

In the middle of a five-game losing streak, momentum wasn’t on their side, Maurice Colter wasn’t on the court and the new year wasn’t going the way WU planned.

All of that changed in mid-January when coach Bob Chipman found a lineup that worked and the Bods won four consecutive games, capped off last Wednesday with a 78-62 victory against Northwest Missouri.

A 74-63 loss Saturday at Missouri Western cost WU a chance to match its season-best five-game winning streak, but the sudden success over the past two weeks pulled the Bods (11-9 overall, 5-8 in the MIAA) out of the race for last place in the MIAA standings and put them on the right side of the bubble for a spot in the conference’s postseason tournament.

“It’s a pretty new group, really a young group,” Chipman said. “When you add in all the injuries we were going through, that made things difficult. We’re probably at the point right now where a lot of the teams in the league were at the beginning of the season. It takes time, but we have a group of guys now that I think are ready to compete in this league.”

Earlier in the year, as injuries and losses mounted, WU struggled to find its identity and experimented with various lineups, at times starting three freshmen.

After starting the first seven games of the season, Colter played a total of just three minutes in four mid-December contests because of injuries and a flight delay that kept the junior guard from coming back to Kansas over winter break.

He didn’t return to the starting lineup until Jan. 5, three days after WU dropped back to back games at Central Missouri and Fort Hays State, two teams that rank in the top five nationally.

Since Colter regained his role as a first-teamer after that treacherous road trip, the starting five has remained unchanged and the consistency has paid off for the Bods, who have stormed back from a 1-7 start in the MIAA.

“It’s not that it’s a bad thing to start three freshmen,” said sophomore guard William McNeill. “It’s their first time playing in this league, but that’s true for just about all of us. It’s just good to have Mo back because he’s got experience playing point guard in junior college. He knows how to run a team.”

As one of three players returning from last year’s team, McNeill has experience at the collegiate level as well, and it showed when the Bods won their fourth consecutive game last week. Colter’s backcourt teammate scored WU’s first six points against NWMSU and set the tone as the Bods opened up a 20-point lead. He finished with 20 points, while Washington nearly logged a triple double with 19 points, 10 rebounds and seven assists.

“With a young group, you need confidence and it helps to jump out to an early lead,” said Chipman. “We know we’re good and (Monday’s) practice was the best we’ve had all year, but it’s still a matter of actually stepping onto the court in games and proving to yourself that you can pull it off and keep it going.”

After coming up short at Missouri Western, the Bods are now faced with the challenge of making sure one loss doesn’t turn into another losing streak. McNeill scored 21 points against the Griffons and Washington finished with 19 for the fourth straight game, but MWSU, the most experienced team in the MIAA, held off WU’s late rally.

“They may be the most athletic team in the country,” Chipman said of the Griffons. “They’ve got 22- and 23-year-olds who have been together for two or three years and they haven’t lost at home all year. You always want to win games, but when they got up by 20 and we’re on the road, a lot of people would consider that an impossible situation. For us to come back the way we did, I think it shows a lot of fight in our guys.”

A 13-2 run in the game’s final eight minutes brought WU within eight points, but the Griffons hit eight free throws in the final four minutes to secure the win.

The Bods continue their road trip with a game at Truman State at 7:30 tonight. Things won’t get any easier when No. 3 Fort Hays State visits Lee Arena on Saturday at 7:30 p.m. WU will look to sweep the Bulldogs after beating them 87-66 at home earlier in the season. After traveling to Kirksville, Mo., the Bods begin a three-game home stand against the Tigers, who have been in the top 25 all year.

In the MIAA, no game is a given, especially against a team like FHSU, which beat WU 68-55 in their first meeting at Hays. However, if the Bods’ four-game win streak and comeback against MWSU is an indication of how they’ll play the rest of the season, Chipman said he likes his team’s chances to continue climbing up the standings as the calendar turns to February.

“It’s an incredible group of guys that are really trying for Washburn,” Chipman said. “I’m as proud of this team as any group I’ve ever had and I’m really excited about where we’re going. There’s teams in this league that have been ranked No. 3 and lost, ranked No. 5 and lost and any team in the MIAA is capable of winning, but there are some competitive teams that are resting on their laurels, not trying to get better, and with the way we’re practicing and playing right now, we’re at the other end.”