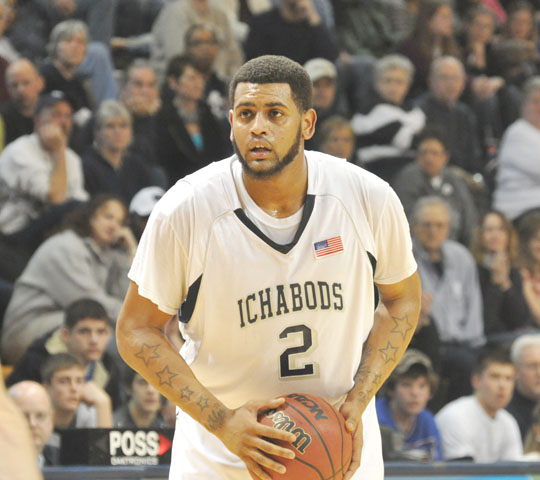 All-star De'Andre Washington, a 6'5, 235-pound junior forward transfer from Pensacola Junior College, is the Ichabods' top scorer this year. Washington leads the Ichabods (12-10, 6-9) into action at 7

The Washburn men’s basketball team has several young, capable scorers, but one has emerged as the Ichabods’ go-to player offensively. When the team is in a bind and needs a bucket, every player in the WU huddle has a pretty good idea of what play will be drawn up: Mr. Chipman goes to Washington.

And for good reason, too.

De’Andre Washington is one of 11 new Ichabods on this year’s team, but he has helped fill the void left by last year’s seniors, leading the 2009-10 Bods in scoring, rebounds and assists.

The Pensacola Junior College transfer has been the high-scorer in 13 of WU’s 22 games this season and played a key role in the Bods’ recent hot streak, helping the team win five of its last seven contests.

“He can dribble, he can shoot, he can post up,” said teammate William McNeill. “I mean, he’s just a great player all around. He’s really a key to our success this year.”

For as much talent as Washington brings to the table, it’s hard to picture what the Bods would have looked like without him. On a team that was almost entirely rebuilt heading into this season, the addition of the 6’5 forward didn’t happen until right before classes started in the fall.

Just two months before team practices began, Bob Chipman and his coaching staff inked Washington and three other junior college transfers to round out the 2009-10 squad. The signing didn’t come until four months after the recruitment period opened, but after witnessing what Washington is capable of, Chipman said it was worth the wait.

“We did a great job finding him late,” he said. “But I didn’t know he could score inside, outside and his ability to pass.

Although the coaches may not have been sure at first what all Washington could do, at least one fellow Bod knew all about Washington. Virgil Philistin, who also transferred from Pensacola, started alongside Washington last season at the Florida junior college and now shares a room with him at WU.

“When he was coming in this year,” Philistin said, “I knew he was going to bring 100 percent.”

It didn’t take long for Washington’s new teammates to realize the benefits of his versatility. The team started 5-0 with Washington averaging 17 points. Chipman said when a team has a player like Washington flying to all areas of the court, it’s a common mistake for teammates to get him the ball and watch as he does all the work.

On this team, however, everyone benefits from Washington’s talents. His numbers have climbed to 17.6 points per game, but his team-high averages in assists (3.5) and rebounds (8.3) show Washington wants to do more than just put the ball in the basket.

“For a while,” Chipman said, “We had players standing there watching him, which obviously isn’t good. But now, he’s such a great passer so with his reads, he’s getting down low, which is helping the guys. He’s not only a great scorer, but he can do it in many ways. He can find the open man as well as anyone I’ve had.”

Washington is the only Bod to start all 22 games this season and until Saturday’s 74-62 loss to No. 8 Fort Hays State, he scored in double figures in every contest. After scoring a season-low nine points against the Tigers, Washington and the Bods will look to bounce back at 7:30 tonight against No. 3 Central Missouri.

“The better we do as a team, I think my game elevates,” Washington said. “In the big games, there’s more people watching me, so my assists and rebounding go up, especially when the team needs a big rebound. I think my game just elevates to the situation.”

With a second top 10 team coming into Lee Arena in a five-day span, there are few situations bigger than this for the 2010 Bods. Although the team has taken its share of lumps in a 12-10 campaign, a common goal for the players is to finish strong and build something special for next season.

A majority of the team may be new now, but in the eyes of this young WU squad, that just means bigger, better things when they’re all back together again next season.

“Next year,” Washington said. “Our expectations are going to be bigger because we’ve been together longer.

When glancing at the rosters of Central Missouri, Fort Hays State, Missouri Western and other conference teams that have appeared in the top 25 this season, it becomes obvious that senior leadership plays a big part in staying competitive in the MIAA. The Bods don’t have any seniors this year, which partially explains why they had to fight back from a 1-7 conference record to get where they are now. If everyone returns next season, WU will suit up seven seniors.

For Washington, Philistin and other junior college transfers that were pushed immediately into leadership roles upon their arrival at WU, playing for a team filled with experience couldn’t sound any better.

“I see us doing big things,” Philistin said. “The sky’s the limit.”