In need of a bowler 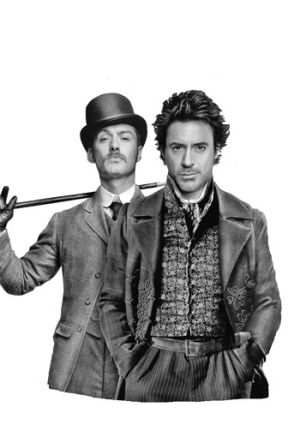 If someone had told me that there was going to be a Sherlock Holmes movie starring Robert Downey Jr. I would have been thrilled. Likewise, if someone had told me that he was also working on a new movie directed by Guy Ritchie I would have been equally thrilled. But somehow the notion that Guy Ritchie was directing a movie about Sherlock Holmes starring Robert Downey Jr. is not quite as awesome.

As much as I like Ritchie’s work “Snatch,” “Rocknrolla,” or “Lock, Stock, and Two Smoking Barrels,” those movies all tend to revolve around gritty, stylized violence and low class criminals instead of the eerily sharp observational deductions Sherlock Holmes is best known for. Still, as mismatched as it seemed to me, I doubted very much it would be bad, just not ideal.

When I finally saw “Sherlock Holmes” I got exactly what I expected; several fight sequences shot in new and unexpected ways, an eccentrically quick-witted Holmes, a dangerous love interest who one could guess was added to appease producers, and a mystery that required very little deduction and a lot of fighting to solve. Although, to be fair, Holmes’ case was not anything terribly obvious or unchallenging so much as it was atypical. Between the questionable loyalty of Irene Adler, Rachel McAdams, the reoccurring presence of an oversized henchman, and the elaborate plans of Blackwood, Mark Strong, “Sherlock Holmes” seems more like late 19th century James Bond film.

Aside from its arguable faithfulness to the series, “Sherlock Holmes” is just a lot of fun to watch. Robert Downey Jr. gives yet another in a long series of exceptional performances. Jude Law compliments him surprisingly well, certainly enough for me to retract all of those unkind things I said when I found out he had been cast as John Watson, all except for my admittedly unfounded claims that Watson should always be wearing a bowler hat, which Jude Law never does.