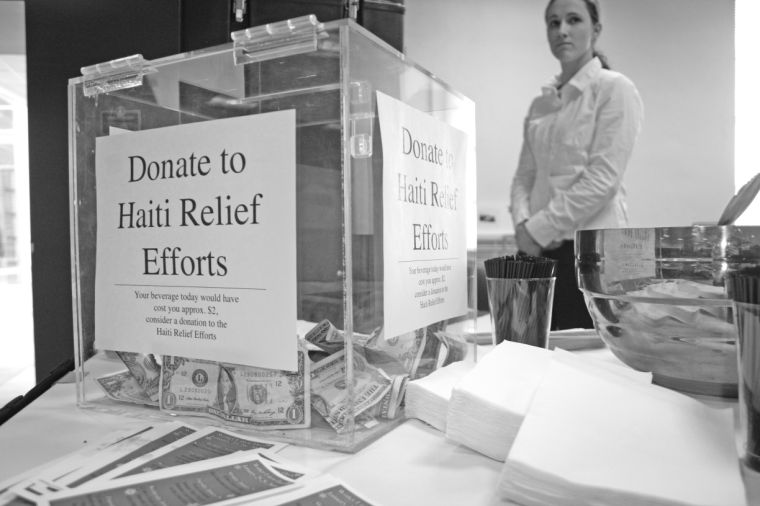 Drops in the bucket Dollars flitter lightly to the bottom of a donation box as students pass by to receive free coffee. The money raised from this combined event went to the American Red Cross for Haiti relief. A group of 19 Washburn students will soon visit Haiti.

Recently, events in the poverty-stricken nation of Haiti have inspired campus groups to action in an attempt to do something to help the citizens of Haiti.

Last month Haiti, which according to United Nations statistics, is one of the five poorest countries in the world and the poorest country in the western hemisphere, was struck by a magnitude seven earthquake. Several aftershocks of 4.5 and stronger came in the following days.

The resulting damage from the earthquake provided an opportunity for Washburn’s students to do something to help those effected by the disaster as hundreds of thousands are reportedly dead and just as many, if not more are without the basic necessities of life.

In the case of Washburn’s Learning in the Community (LinC), plans had been in place prior to the earthquake for students to travel to Haiti in an upcoming trip to participate in work to help a medical clinic on the poverty-stricken island.

“Dr. [Rick] Ellis was spearheading a trip ahead of time but that was put on hold after the earthquake since we didn’t want to put students in a dangerous situation,” said Kristine Hart, community services coordinator for LinC.

Those plans have now turned to the current events occurring in Haiti as LinC has received support from 19 students to volunteer for a trip being planned for a later date to help with rebuilding Tom Anderson’s clinic in Haiti. Anderson is a Washburn alumnus who now resides in Santa Barbara, Calif.

“Anderson usually goes down to Haiti about four times a year,” said Hart “Students who go would be working with him to help get the clinic back up and running.”

Outside of LinC’s efforts, other parts of the campus have been active as well. Alpha Phi sorority set up a table in Memorial Union to solicit funds to those passing through the Union. Campus Ministries assembled health care kits of basic items like soap and sterile hygiene items to send to Haiti.

Business Services in Memorial Union also took the opportunity to combine already planned events, namely winter union days, to help if it could.

“We had already set our union days schedule in motion, so we set out a jar to see what we could do to help out,” said Janel Rutherford, assistant director of Business Services.

Other events off campus took place as well with community schools like Randolph Elementary using its “100 days of school” event as an opportunity to raise money by having students bring 100 coins to school for planned activities. Afterward the coins were collected and donated to Haiti relief efforts.

For Topekans who enjoyed the night life Jet ultra lounge also hosted a benefit Thursday night that was sponsored by both LinC and Washburn. The event featured 11 different acts ranging from rap to rock and was emceed by Dj 151 and DJ Hawk.

All organizations that have raised money thus far on campus have funneled it to either the American Red Cross or Oxfam America, organizations able to put the money to use in Haiti.