No. 3 Central Missouri tops Washburn by 10 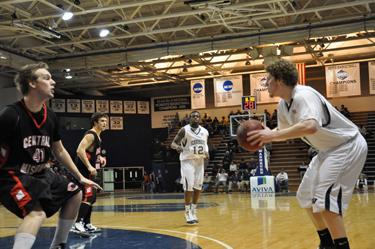 Washburn SID
A career-night by Washburn’s Logan Stutz was not enough as the Ichabods fell to No. 3-ranked Central Missouri 74-64 in Lee Arena on Wednesday night. Washburn will be back in action on Saturday when they will play host to Southwest Baptist wrapping up a three-game homestand at 7:30 p.m.

The Ichabods trailed by as many as 11 in the first half at 15-4 with 10:42 to go in the opening stanza but rallied to take the lead on three different occasions with the final lead coming at 25-24 as De’Andre Washington wrapped up the 20-10 run with a lay up with 2:18 to go in the half. Central pushed the lead back to three, but Stutz scored on a lay up with five seconds left sending the Ichabods to the locker room trailing 30-29.

The Mules came out of the break and quickly pushed their lead to six at 35-29 with 18:55 to go. Following an Ichabod timeout, Washburn cut the lead to two – the final time coming at 37-35 after Virgil Philistin connected on a lay up. A 12 to 5 run stretched the Mule lead to 49-40 with 11:20 left. The Ichabods would trim the lead to five with just over 10 minutes to go on a lay up by Stutz and a pair of free throws by Bobby Chipman.

Stutz finished with a game-high 22 points off the bench hitting 10 of 12 shots and canning his only 3-point attempt while adding eight rebounds with five on the offensive end. Washington recorded his ninth double double of the season with 14 points and 11 rebounds and Mauice Colter added 11.

Alex Moosmann led the Mules with 20 points on 8 of 10 shooting from the field. Ryan Harris added 19 and Sanjay Watts had 17 and Bryce Brunz had 10.

Washburn finished the game 26 of 62 from the field for a 42 percent average while the Mules were 23 of 43 for 52 percent shooting. The Mules held a 28 to 10 advantage in free throw attempts while converting a total of 21 of 28 while the Ichabods were 7 of 10.