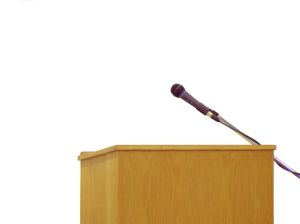 From “Super Size Me” superstars to white-collar whistle blowers, the Washburn Student Government Association has worked hard to bring guest speakers to campus who students not only recognize, but who also have an interesting story to tell.

While WSGA is not currently involved in any negotiations to finalize a third and final speaker to complete its annual lecture series, the first two speakers brought in rave reviews after attracting an audience of more than 1,200 students, faculty and community members.

In response to the timely debates about health and obesity, WSGA brought in Morgan Spurlock, star of the 2004 documentary “Super Size Me.” Mark Whitacre, the highest-level executive in a Fortune 500 company to turn whistle blower in U.S. history and the inspiration behind Matt Damon’s character in the film “The Informant” was brought in as well during the fall semester. His story proved relevant to the current recession and state of the nation’s economy.

Garrett Love, WSGA president, said that the main goal of bringing speakers to campus is to find someone that students want to see. He said that informal surveys are done to find out what students really want to see or hear.

“We definitely don’t want to target just one specific population,” Love said. “That is the biggest thing that we look at, in addition to pricing.”

“What we do depends on what other people can put towards it,” Love said, explaining that WSGA frequently partners with the Washburn Endowment Association, Campus Activities Board and other community groups and businesses.

The Endowment Association especially plays an integral part in providing funding for such events through telethons and other fundraising. Conversations with Washburn alumni and previous donors also encourage people to give in order to provide students with these opportunities.

Speakers are also paid for with the university activity fee, which is a $43 fee that Washburn students pay at the beginning of each semester.

“We want the money to go where the students want it to go,” Love said. “The budget is public information. Students have a big say in how their money is spent. WSGA takes spending the student activity fee very seriously. We want it to be used very effectively and efficiently for Washburn students.”

Caley Onek, vice president of WSGA, commended the university on the support it has shown for this lecture series, especially the buy-in that they have received from faculty and staff who have encouraged student attendance through extra credit opportunities or class participation points.

“[The lecture series] has been the most consistently successful event on campus,” Love said, adding that there was standing room only for both the  Spurlock and Whitacre presentations.

While no speaker has been set for the final spot in the series, WSGA is optimistic about the possibilities they are currently considering. Possible speakers include Chris Gardner, inspiration for the film “Pursuit of Happyness,” Angela from the television show “The Office,” and wildlife enthusiast Jeff Corwin.