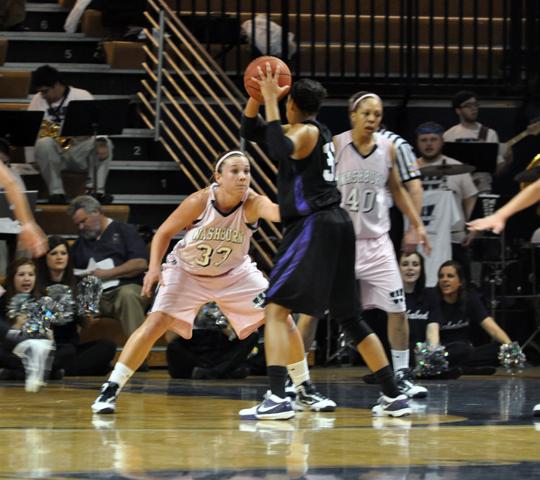 Think Pink Junior guard Hope Gregory accumulated a season-high 15 rebounds and five points Saturday against Southwest Baptist. The game was Washburn’s Pink Out night, and the Lady Blues cruised to a 77-68 victory behind a career night from senior forward Dayna Rodriguez, who scored 32 points.

When the Lady Blues are trying to stay afloat with their sometimes sub-par shooting average, Hope Gregory, the 5’10 junior guard from Cheney, remains the element—shooting 34 percent from behind the arc during her 2008-09 season.

“She is the X-factor,” said coach Ron McHenry, “and the team needs her.”

The Lady Blues will play Missouri Southern tonight at 5:30. The team’s first loss was claimed by the Lions, and Gregory said it is time to avenge that.

“I told the paper we weren’t going to lose anymore,” she said. “We are going to keep them from easy baskets. It will have to be a jointed effort, but hopefully we will tail them by 30.”

Gregory is versatile under the basket. She averages 9.6 points and 7.6 rebounds per game. Before the current season, she had started 32 games of her 70 throughout her career at Washburn. In the 2007-08 season, she started 24 of 33 games, after just recovering from a torn tendon in her foot. She said the injury did not affect her play.

“I think the redshirt helped me,” she said.

Last season however, Gregory only started eight games, for unknown reasons; possibly her position as a three and how her bearing factored into the team’s look. She now plays a four and starts as a guard.

“I just go for what the game calls for,” said Gregory, “I might pick up trash around the basket.”

As a high school athlete, Gregory was first team all-league pick all four seasons. She averaged 18.5 points, 10.5 rebounds, 3.2 assists and 3.7 steals as a junior.

“[In Cheney] sports are pretty big,” she said. “It’s a small town, so there is nothing to do. If you aren’t working, you are playing sports. And really, who wants to work?”

During middle school, Gregory’s parents made her choose between basketball and softball. Because of her passion for the sport, she chose to chase the net. She said that when other sports were over, she was ready for them to be over. Except for basketball, which she always found a way to play, often in summer tournaments.

When college knocked, Gregory had the opportunity to play for a division I school.

“Washburn was the only Division II school I was interested in,” she said. “It comes back to winning, I wanted to win national championships.”