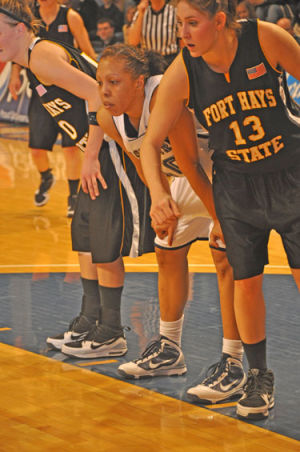 Dayna Rodriguez, the 6’2 senior phenomenon from Havana, may have only seen snow for the first time during her 2008-09 season at Washburn, but she makes it rain under the glass every game.

Rodriguez played for the Cuban Jr. National Team in Mexico, but there is little recorded history of her playtime. However, she said she has strong memories of playing basketball in Cuba, which is something her parents encouraged her to do after recognizing her skill for the game.

“In my town, we always played basketball,” Rodriguez said.

Since defecting from Cuba, Rodriguez has played for Miami Dade University and Washburn. She had a good chance to play for a Division I school, but was inhibited by her age. The 28-year-old started her athletic career with finesse as she entered the FCCAA. As a freshman and a sophomore, she made two Florida Community College Athletics Association regional state championship appearances with her team.

The language barrier was Rodriguez’s biggest hurtle after coming to the U.S. Luckily, Miami Dade’s head coach, Susan Summons, spoke enough Spanish for Rodriguez to feel comfortable with plays. Playing for the Lady Blues, however, has proven to be more difficult.

“That was very hard,” Rodriguez said, “I have had to study a lot. It is difficult when you want to explain something, but you can’t because it’s not in your language. When it is loud during a game, you cannot hear the plays as well. I have to ask, ‘what is the play?'”

Coach Ron McHenry said it has been interesting to watch Rodriguez grow from being a role player to an impact player.

“We have been working on trying to finish shots. She spins herself into where she can’t finish as well. So her strength is a weakness,” McHenry said, “she gets out of position to play.”

Rodriguez averages nearly 30 minutes a game, said McHenry—a testament to her value as a player. In her 2008-09 season, she averaged 4.1 rebounds per game and shot 45 percent from the field after making 90 of 202 field goal attempts. She scored 241 points—averaging 7.5 points per game. She averages 14.7 points this season.

McHenry said as Rodriguez has progressed, she has become more of a leader, which comes with added pressure.

“Only the good ones can really do it,” he said, “we will only go as far as Dayna goes.”