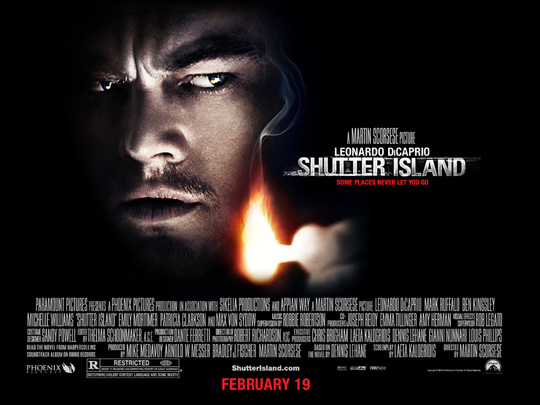 “Shutter Island” was unimpressive, not bad, just unimpressive. Scorsese’s latest movie is an old school mystery/thriller set in the mid ‘50s and with much of the same style as many movies of the time. Teddy Daniels, played by Leonardo DiCaprio, is a U.S. Marshal sent to Shutter Island to investigate the escape of a woman who disappeared from a hospital for the criminally insane while trying to cope with the death of his wife.

The more Daniels investigates the case with his partner Chuck Adule, Mark Ruffalo, the more he starts to focus on the Hospital’s administration instead of the missing woman. Suspecting conspiracy, Daniels pushes his investigation well beyond the legal limits, making increasingly desperate and short-sighted decisions that are believable only because of his increasing emotional stakes in the case. As his personal life begins to interweave with it Daniels starts to buckle under the weight of its enormity. His dreams, played out on screen, are thick with images of his dead wife as well as the murdered children of the escapee. The story catapults to an unexpected ending that invites an immediate re-watching of the entire movie, if you have the time and money to spare.

DiCaprio’s performance felt a little shaky, although much of that is actually a reflection of the character and the near-impossibility for someone to do a subtle Boston accent. The supporting performances by Ben Kingsley and Mark Ruffalo, as well as an incredibly mesmerizing cameo by Jackie Earle Haley (Rorschach from Watchmen) are what really hold this movie up.

But the final reveal at the climax of the story is what really drags it back down to a less remarkable level. The urge to rewatch it is more a result of needing to put things into their new context rather than genuine enjoyment of the film. With endings like “Shutter Island” the general point is to give the audience something totally unexpected that still allows everything else that’s happened to make complete sense, but the big surprise here just feels like too much of a stretch for me. Yes, it puts several errant comments into better context, but the core of the story feels a little too off.

As a whole, “Shutter Island” makes for a compelling movie with a distinct feel not only of the 1950’s, but of movies made at the time with an unfortunately unsound conclusion.