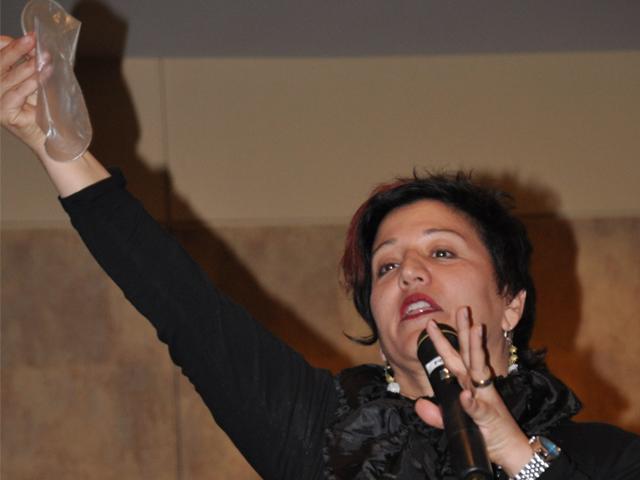 Sex Rules Maria Falzone waves a condom at her speech on Tuesday. Falzone was invited and sponsored by Washburn’s Campus Activities Board because of her reputation as a comedian and her willingness to address tough sexual issues.

Kate Fechter-Stamper / Washburn Review
Sexual education is often an uncomfortable and serious experience, but one speaker coming to campus this week doesn’t think it needs to be that way.
Maria Falzone, a self proclaimed “sexpert” believes in using humor to help educate people on this once taboo, but important topic. Tuesday, Feb. 2, 7 p.m. Falzone is coming to the Washburn Room in Memorial Union to give her presentation “SEX RULES!”
A former stand-up comedian, Falzone now uses her talent to give information on sex and related topics. This free show will address topics like AIDS awareness, self respect, date rape and how alcohol and drugs affect sexual decisions. This event, sponsored by the Campus Activities Board, will speak to all audiences whether sexually active or not and no matter the sexual orientation.
“CAB has seen her perform before,” said CAB member Mary Bannwarth, sophomore. “It’s not only educational but has a good story line behind it.”
According to Falzone’s Web site www.mariafalzone.com, Falzone includes her own personal experiences in her speeches. Falzone talks honestly about contracting a venereal disease from a friend and what affect that has had on her attitude toward sex. Her mixture of honesty and humor has made her very sought after by colleges throughout the country. She also gives information to help students develop ground rules for better and safer sex.
On her site, she explains that she feels that students are educated on many subjects, but in a society in which sex sells, many are left with little or no guidance. This leaves many people unprepared for the possibility of an emotionally or physically scarring experience.
The Centers for Disease Control says sexually active teens and young adults are at a high risk for sexually transmitted diseases. It also states that people already infected with an STD are more likely to contract HIV if exposed to it through sexual contact.
Falzone has been in the top comedy clubs around the country and her television experience includes Showtime’s “Full Frontal Comedy” and NBC’s “Friday Night Videos.” Falzone’s “SEX RULES!” program is intended to educate, not lecture or impose an opinion on students.
“It’s not to tell you when to have sex or not to have sex,” said CAB member Josh Maples, senior. “It’s about giving people the information to make an informed decision.”
Delete Image
Align Left
Align Center
Align Right
Align Left
Align Center
Delete Heading