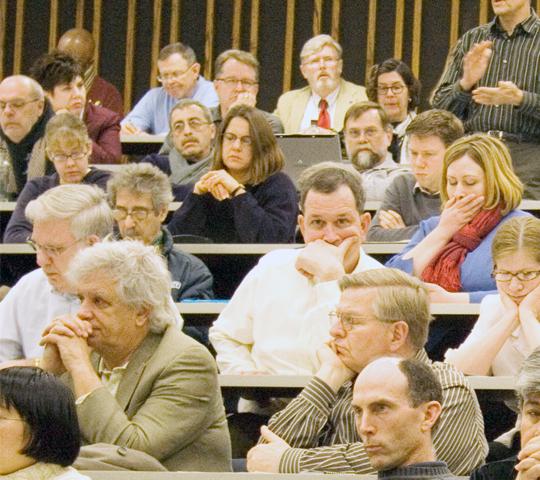 Let’s Vote Roy Wahl discusses the reasons PE 198 should remain a graduation requirement at WU during last Thursday’s general faculty meeting. At the meeting, two very important issues were put to a vote

In what was a quick end to a long process, two decisive votes were cast last Thursday to decide the future of two Washburn graduation requirements.

The two votes and the debate that accompanied them were in stark contrast to the mood of the afternoon as the faculty gathered inside the cavernous classroom of Henderson 100. Attendance Thursday was also unusually high for such a meeting some faculty mused as the room began to fill up.

In the case of the vote on the mandatory status of the Washburn Transformational Experience, the process started last spring when Washburn Student Government Association conducted surveys to gauge the mood of Washburn students and came to a decision to recommend to the Washburn Faculty Senate the change in status for the WTE.

“We conducted extensive research with all the available data that could be gathered and speaking with every unit across campus, either in face-to-face interviews of via e-mail,” said Kathy Menzie, chair of the academic affairs committee.

The Faculty Senate, after further deliberation, made its recommendations to the general faculty which brought the issues to Thursday’s meeting.

The first of the two issues of great interest to be brought up for debate was the status of the course PE 198, the mandatory physical education requirement at Washburn. In the course of the debate on the status of the class many people voiced their opinions as the staff of the kinesiology department stood up to defend its decision to not bend to requests for further changes in the class structure and its mandatory status in Washburn’s curriculum. Among the concerns addressed were the course’s inability to be transferred to and from Washburn.

“The transfer committee made a recommendation to cut the requirement because it isn’t transfer-friendly and that isn’t true shown in the 85 percent transfer rate that we have seen just in the last three years,” said Roy Wohl, chair of the kinesiology department.

Citing the statistics that their department had gathered, the kinesiology staff pointed to the need to continue to have PE 198 as a requirement.

“Studies that have been conducted showed an increase in the areas of learning as well as self perception as students experience the course,” said Park Lockwood, assistant professor of kinesiology.

The next tactic members of the gathered faculty tried to push against the resistance of the kinesiology department staff was that while some transfer students had completed the lab portion or the lecture portion of the course, students are required to take the whole of the course and are not offered the chance to take either of the course components separately. The department however, once again defended its case.

“This has been by far the most tweaked and adjusted course of any department across Washburn,” said Wohl.

Further, the kinesiology department staff defended the class in comparison to other courses.

“This class has been held over time to a higher and perhaps unfair standard,” said Lockwood.

The final point made in the debate helped to fully illustrate the reasoning of the kinesiology department.

“We can’t just separate out the lab from the lecture portion of the course,” said Patti Bender, assistant professor department of kinesiology. “It would be like teaching writing without having people actually write. Just talking about it isn’t enough. We need to see the student implementing the skills they acquire.”

In the end, the vote was 97-53 in favor of keeping PE 198 a mandatory part of the Washburn graduation requirements.

Those in the room that thought that the PE 198 debate was spirited were perhaps taken aback by the tenor of the discussion of the future of the Washburn Transformation Experience.

The discussion was started by Rick Ellis, director of the community service WTE, who pointed to surveys that had been conducted with students who had finished WTEs as proof of the need to continue to require students to complete a WTE.

“Prior to students conducting a community service WTE, 58 percent of students had an understanding and appreciation of democracy as opposed to 80 percent afterwards,” said Ellis, “Ninety-five percent of all students surveyed said that they had a positive experience.”

Many professors stood in opposition to the mandatory status of the WTE, pointing to areas such as student recruitment and retention as issues where Washburn was seen as being at a competitive disadvantage.

“We all have to acknowledge that there was improper implementation of the WTE and it was definitely not marketed correctly either,” said Azyz Sharafy, associate professor, art department.

Other proponents of the WTE approached the debate in a more pragmatic nature warning of the possibility of what could happen if the program was changed without working through the possible consequences.

“When we brought this program out we didn’t have a plan for putting it in practice,” said Stephen Angel, chemistry department chair. “There was no infrastructure in place to support the WTE. Let’s not make the same mistake twice by making it optional without working through what it’s going to look like.”

Perhaps the most passionate proponent of the WTE remaining a mandatory part of Washburn’s graduation requirements came in the form of Kim Morse, assistant professor of the history department.

“We need to keep this program in place because given a choice students aren’t going to do this unless they are told they have to,” said Morse. “This vote isn’t just about the WTE. It’s about the values of education we hold here at Washburn.”

Morse’s assertions that students wouldn’t participate in the WTE program unless mandated to do so were derided by members of the faculty who suggested that because of her passion over the issue that, “inspiration rather than coercion,” might be a better approach in the future if the program were to be made optional.

As the debate continued the student’s voice was eventually pulled into the conversation as well.

“The vibe [WSGA] gets from around campus is that this program is perceived negatively by the student body,” said Garrett Love, president of Washburn Student Government Association.

In explaining the initial steps that WSGA took to pursue the issue of the mandate behind the WTE program, Love described the process by which the student government came to its conclusion.

“We surveyed 150 people last spring who would be considered the top tier of Washburn students,” said Love. “Of the 150, we received 45 responses. Everyone that took that survey said that they loved it for one reason or another, but that the rest of the student body was openly negative about it.”

After some parliamentary delays the question of WTE mandatory status was put to a vote resulting in a 115-45 vote to make the WTE an optional program and not a Washburn graduation requirements.