You can’t handle the truth 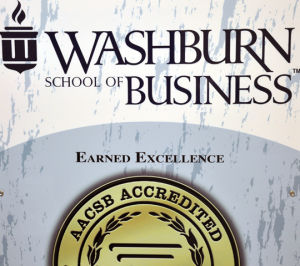 During the spring semester, David-John Tiemens, a business student, was denied access to the general statistics regarding the success rate of students in Applied Calculus, a prerequisite class for entrance in the School of Business.

According to the Kansas Open Records Act, class statistics are considered public records and are therefore public domain. However, when Tiemens sought these records from Kevin Charlwood, chair of the math department, he was told that class performances were not open for public consumption.

“I didn’t do well in the course, but no one did well,” Tiemens said. “I was thinking, ‘is it me or do I just hang out with dumb kids?'”

Tiemens went to the School of Business in hopes of acquiring the records, which include the number of Ds, Fs and withdrawals from the class by the entire Applied Calculus class. He was redirected to the math department.

Tiemens sent an e-mail to the math department specifically requesting D,F,W statistics relative to class size per professor, for the last three years. In an e-mail reply from Charlwood, Tiemens was asked about his need for the data, if he was conducting some kind of research study and was told that further details would be needed before thinking about trying to set up a meeting to discuss the statistics.

The Kansas Open Records Act states that “All public records shall be open for inspection by any person, except as otherwise provided by this act, and suitable facilities shall be made available by each public agency for this purpose.”

As Washburn University falls under the definition of public agency, the institution is required by law to abide by the guidelines established in the KORA. Exceptions that would allow the denial of records include: if the public agency has reason to believe that the requests are intended to disrupt other essential functions of the agency or if the request places an unreasonable burden on the public agency in producing the records.

“I don’t know of any exception to disclosure,” said Mike Merriam, adjunct media law professor and practicing lawyer, “but I would need to know the reason for denial.”

In fact, Kenneth Hackler, University Counsel, said general grades are open to the public and absolutely covered under the KORA. Hackler said Tiemens should have sought the proprietor of the records—in this case, Wanda Hill, vice president of administration and treasury, but any institutional record is public domain, therefore, when grades are submitted, they become public domain. General grades can be accessed by anyone, but any identifying or personal information would need to be redacted, he said.

Hackler said the reason for denial is likely simple—Charlwood was unaware of the KORA, which is not a reason to hold the University liable.

But the question that remains concerns the need for students to access such records.

“This would allow students to professor shop,” Tiemens said. “Maybe it will expose a problem in the department, and in the long run strengthen the program. But I would just rather the college do what it needs to do.”

“We don’t give out an end-of-the-semester report,” said Nancy Tate, associate vice president of academic affairs.

According to the KORA, the university could decide whether or not to populate specific statistics regarding drop rates upon student request, since the record does not exist already, and a fee could be imposed.

Tate said she was only concerned with the possibility of revealing personal student information, and so such records would need to be populated in the aggregate—by course. But she also said she thought students had little need to see how their peers were performing, suggesting judgments be based only on individual grades.

“Maybe [Tiemens] should consider if he is cut out for the business school,” she said.