Board of Regents discusses outsourcing 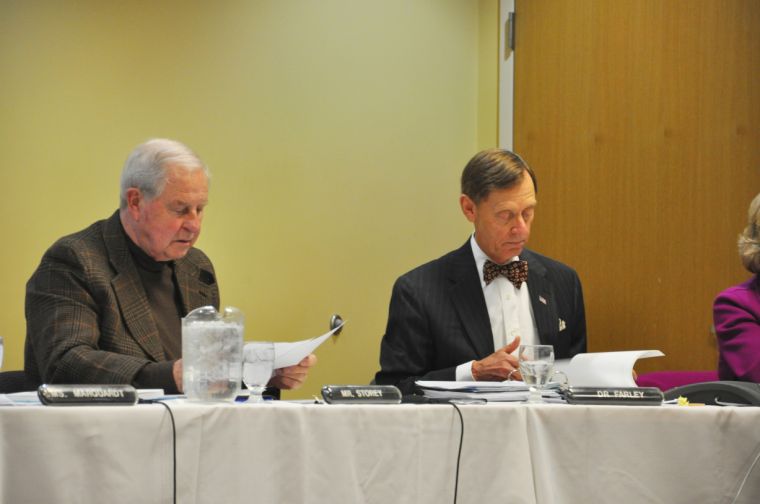 Budget Dilemmas Board member Bob Storey and University President Jerry Farley review paperwork at the Jan. 29 Board of Regents meeting. After discussing the possibility of outsourcing facility services, the Board received criticism from former employee Mary Lou Herring who suggested an audit of administrative salaries as a means to cut expenses.

Amidst the beautiful children called good news that were borne in gleeful tones to the Board of Regents at the meeting on Jan. 29, the bitterly jealous and red-headed stepchild named “outsourcing” took center stage for much of the time.

Washburn University President Jerry Farley began his report by announcing that university housing and enrollment are both significantly higher than last year. But apparently even the higher numbers are not enough to maintain the university, because even after this positive news, board member James Roth reported that the Budget Finance Committee voted unanimously to move for a bid to see how much the school could potentially save by outsourcing its maintenance and facilities services.

“We are not asking to approve them at this point,” Roth said, noting that this was only a move to see if outsourcing some services is worth the trouble. He said that the university would incur no out-of-pocket costs for issuing a request for proposal to companies interested in taking over the facilities services of Washburn.

The Regents listened to other speakers before voting on the matter, and even after unanimously voting to send out RFPs, the board maintained that this move does not necessarily mean that it will, in fact, outsource the facilities services.

“I’m going to go with ‘aye’ (on sending out RFPs), but that has nothing to do with how I’ll vote when the RFPs come back,” said board member Bob Storey. “We have to look at all our options…There has to be saving we can do, and not just at certain people.”

The Steel Worker’s Union members also proposed changes to the compensation clause of the maintenance and facilities services contract to help reduce costs. Emil Ramirez, a union representative, said the union is working hard to get people back on the job faster.

“In Kansas we’re at the bottom of the worker’s compensation benefits and premiums,” said Ramirez, “We’re 48th out of 50.”

Washburn University’s union president, Mike Haze, said that it is only natural that the board would send out RFPs.

“Any and all avenues should be looked at…The union has presented a plan, and that’s going to be looked into, too, and I think that’s important,” he said.

Mary Lou Herring also spoke up at the meeting, saying that part of the budget issues are due to the administration’s lack of respect for faculty members. Herring, a Topeka CPA and former Washburn employee, cited the faculty vote of “no confidence” in Michael Gunter.

“Your administration has flat-out ignored that,” said Herring. “It is astonishing to watch your callous disregard for the faculty.”

Herring suggested that, instead of outsourcing jobs or cutting faculty, the Regents should do “an independent analysis of administrative salaries,” as well as hold Farley to a higher accountability.

Farley denied that the school was targeting those at the bottom, saying, “As resources decline, inevitably you have to look at reducing costs across every area…It’s across the board.”

One more cost-cutting plan that was opened is a retirement incentive, which will provide health insurance for up to three years and give a one-time payment of 50 percent of an employee’s current salary for those employees that turn 62 by July 1 and have provided 10 years of service to Washburn University. Farley said that this measure is designed to protect those of low income while potentially saving the university money.

The meeting also included presentations by Gordon McQuere, dean of the college of arts and sciences, and Willie Dunlap, dean of the school of applied studies.

McQuere reported that although there has been a decline in student enrollment, the college of arts and sciences is still counting the past few semesters as a success because the faculty has managed to decrease expenditures at an almost equal rate. The newly increasing enrollment is heartening, McQuere said, because every Washburn student takes at least one-third of their credits from this college.

The school of applied studies was also excited to report that it has the largest radiation therapy program in the United States, and the second largest sonography program. Dunlap’s most impressive statistics, however, were the much-higher-than-average percentages of Washburn students that pass professional exams on their first try. Only one program, the Master of Social Work, had an average or below-average rate of passing.

After these encouraging reports, Regents member Judge Christel Marquardt asked the deans if, as Herring said, the board was failing to address the faculty’s issues.

“Perhaps a member of the faculty senate would be better to address that question than one of the deans,” said Dunlap.