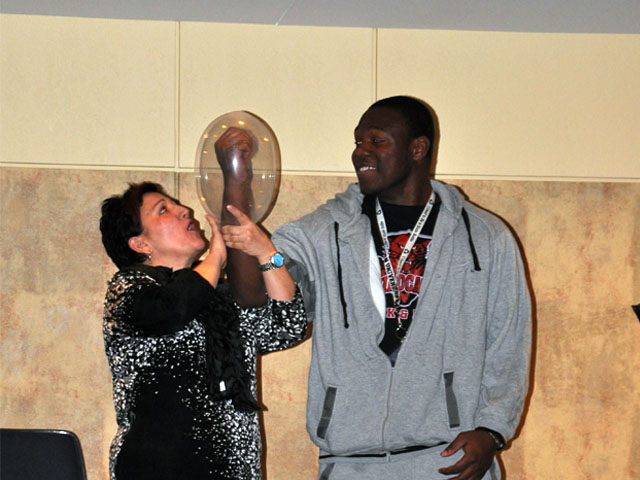 No one knew exactly what to expect when they heard informative comedian Maria Calzone was coming to Washburn and bringing a routine known as “Sex Rules.”

But after roughly an hour and a half of informational yet raunchy comedy, everyone was well aware of her motive as she presented to a full seating of students in the Washburn Room of the Memorial Union. Her speech portrayed and exemplified the usual manner of how college-aged and other ages of individuals deal with their sexuality and how much of what they’ve been taught or lack in being taught is slightly missing the point of what their sexual life should focus on.

“She stood out to us in CAB because she was funny, but was informational and interesting. She was something a little different from the normal types of speakers we bring, so we thought we’d take a risk,” said Maples.

Her topics covered a wide array, from becoming comfortable with one’s own sexuality to developing an open relationship with parents from an early age and also covered safe sex as well as knowing the partner before engaging in sexual activity. Emphasis was based during much of the speech about being true to one’s own feelings with their intercourse.

“The only reason you should have sex is because you want to and because you like it. Not for any other reason,” said Calzone.

Student volunteers were also solicited during her speech and it much of the presentation was received with laughs and clapping, due to the manner in which Calzone presented her information.

“I never expected something this educational to be this much fun,” said Teresa Chui, a Washburn undergraduate.

And as the routine ended, with more messages of emphasis on “coming to a reality with your sexuality”, Calzone pointed out again that she advocates starting sex education from an early age. She explained that letting them know from infancy what is right and wrong as far as conduct is appropriate and jokingly said she would help if needed.

“In ending, I do want to let everyone know, I am available for children’s parties,” she said.

She also provided that she’d be available if guidance was wanted following the show and that she can be reached at [email protected] or on Facebook under “Maria Calzone” if anyone had questions. Maples was aware in closing that with the success of the evening, it would make an impact on future CAB events.

“This definitely has proved as a good performance from our standards and it definitely sets the way for future speeches we’ll have,” said Maples.