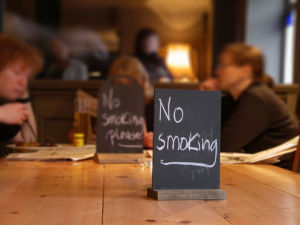 Duct tape is known for its myriad uses, but it is its use as a smoking boundary that has it at the center of a legal dispute.

An administrative hearing officer with the city of Topeka is deciding whether Jim Suwalski and the Hot Pockets Retail Cigarette Outlet violated the city’s recent smoking ban.

The city, represented by Kyle Smith, an assistant city attorney who acts as adviser to the police department on legal matters, argued Feb. 17 that Suwalski violated the spirit of the ordinance by lighting a cigarette within the taped off area designating his tobacco shop, which is inside Hot Pockets Billiards and Sports Bar. Suwalski’s attorney, Bruce Harrington in turn argued that Suwalski was complying with the intent of the law and had the right to smoke within the boundaries of his tobacco shop.

The administrative hearing officer, Kendall McVay, gave both sides 15 days to submit written arguments for consideration and said that he would issue a ruling 10 days after that. The ruling would determine whether Suwalski’s Jan. 20 fine for smoking in a public place would stand and could also result in the bar losing its license to sell alcohol.

When the smoking ban went into effect in December, Suwalski utilized what he considered to be a loophole in the ordinance. He obtained a retail license and opened up a retail cigarette outlet inside the North Topeka bar. The bar is licensed and owned by his wife, Sharon.

Suwalski used duct tape to mark off a 10-by-10-foot area inside the bar to serve as his tobacco shop. The clean air ordinance clearly states that one of the smoking exceptions is inside a retail tobacco shop.