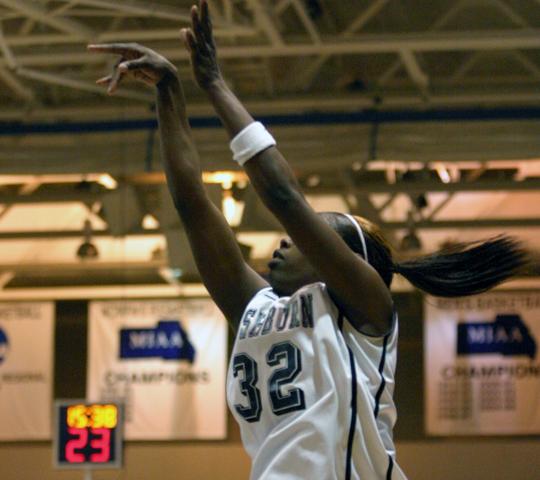 The Lady Blues lost to Northeastern State, Feb. 13, in the South Central Regional semifinals—effectively ending their season. They boast a 27-4 final record for the season.

The regional semifinal game that ended the Blues’ season came out to 56-51—a five-point drag that was well accommodated for in the first half. The team looked well, initially, while it was leading 15-5, six and a half minutes into the game. They managed to bring the spread to as much as 12 at 22-10 two minutes later, but lost the heat when Northeastern State went on a 15-6 run to close the half.

“We started out the game pretty well. They slowly started coming back point for point and we couldn’t turn the game around,” said junior guard Hope Gregory.

In the second half, the lead switched back and forth three times before the Riverhawks took it for good at 47-45 with 5:44 to play. With 23 seconds left on the clock, the Blues cut the lead to three points but were unable to overcome. The three Washburn stars, Brette Ulsaker, Hope Gregory and Dayna Rodriguez owned the floor—Ulsaker with 16 points, Gregory with 14 and Rodriguez with 13. Gregory and Rodriguez each recorded their fifth double-double of the season with 12 and 11 rebounds respectively.

“I thought we played well—not well enough. No matter how well you play, you will always look back and say ‘it wasn’t good enough,'” Gregory said.

Unfortunately, the Lady Blues were 18-of-54 from the field and made only 5-of-26 three-point attempts with 1-of-13 in the second half.

“Obviously, adjustments needed to be made. I felt like we were in a position to win,” Gregory said. “Our defense once again came through but we didn’t have much of an offensive game.”

Before its downfall, however, the team faced Central Missouri for the fourth time this season, and beat them for the fourth time as well.  The Jennies took a lead right off the jump with five points and took the lead to 7-3. But Washburn answered with a 15-0 run and led 33-19 at the half. In two instances, the Blues led by 21. Somewhere between that lead and leading by eight is where the game remained. Rodriguez held majority by score with 20 points and 10 rebounds. Ulsaker scored 18 in addition to four assists. Gregory added 11.

“Knowing that we were going to have to play them again, we weren’t very excited about it, but we had to go into the game focused,” said Gregory. “Playing any team four times with the last two back-to-back is very difficult,”

In contrast to the match up with Northeastern State, Washburn shot 26-of-57 and out-rebounded Central Missouri 40-31. The Blues made four three-point field goals and were 16-of-24 from the foul line.

The Blues maneuvered through their season as a noticeable force with attendance at home games reaching a total 26,401. Scoring was 2,199, total, with an opposing 1,714—giving Washburn an average of 70.9 points per game. The Blues also managed a .419 field goal percentage, .350 three-point percentage, .689 free-throw percentage, 41.6 rebounds per game and 15.8 assists per game.

Despite good looking numbers, Gregory said she would have liked a championship.

“I haven’t even gone back and looked at our basketball home page since we lost,” she said.

But credit still goes to the fans.

“We have a great fan base and we always have,” Gregory said. “It’s important for our program to be able to sell, on average, 3,000 tickets, so that’s awesome. It ended too quick.”