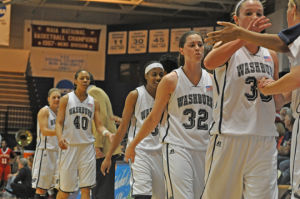 KANSAS CITY, Mo. — The 10th-ranked Washburn Lady Blues rallied to take their first lead of the game late in the first half and then never trailed again on their way to a 68-56 win over Central Missouri on Sunday afternoon at Municipal Auditorium. The win gave Washburn its sixth MIAA tournament title in the last eight years. Washburn receives the automatic bid to the NCAA Division II Championships. The complete bracket will be announced tonight at ncaa.com at 8 p.m. CST.

The Jennies closed to within a point at 35-34 in the opening minute of the second half, but the Lady Blues responded with a 15-6 run to open a 10-point cushion at 50-40. Washburn pushed the lead to as many as 13 and the lead never dipped below eight the rest of the way.