Lady Blues advance to Round of 32 with win over UCM 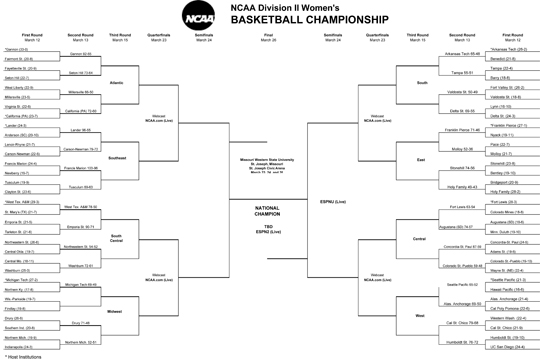 CANYON, Texas — The No. 7 Washburn Lady Blues jumped out to a big lead and staved off a Central Missouri comeback to win 72-61 in the NCAA South Central regional on Friday afternoon at the First United Bank Center. The Lady Blues advance to the semifinals where they will take on Northeastern State on Saturday at 5 p.m.

Dayna Rodriguez scored Washburn’s first six points of the second half and the lead was 17 at 39-22 with 16:54 to play. The lead ballooned to 21 on a couple of occasions, including 49-28 with 10:29 to play in the game. A 9-1 run by UCM pulled the Jennies to within 13 at 50-37 with 8:49 remaining. Washburn quickly pushed the lead back to 18 with just over seven minutes to play in the game. Central Missouri used a 17-7 run to pull within eight with just under two minutes left in regulation, but could get no closer. The Lady Blues made seven of their final eight tries from the charity stripe to pull out the 11-point win.

Rodriguez led all scorers with 20 points, she added 10 rebounds for her fourth double-double of the season. Brette Ulsaker scored 18 points to go along with four assists, while Gregory chipped in 11 and seven boards.

Washburn shot 46 percent from the floor, 26-of-57, while holding UCM to 39 percent shooting, 20-of-51. Both teams made four three-point field goals, while the Jennies were 17-of-30 from the foul line and the Lady Blues were 16-of-24. Washburn out-rebounded Central Missouri 40-31 and forced 14 turnovers and committed 11.

Kara Fleming led four Jennies in double figures with 15 to go along with five assists. Meghan Waggoner, Danielle Shows and Rebecca Roberts all had 11.

The win was Washburn’s fourth over Central Missouri this year. It’s the first time the Lady Blues have beaten a team four times in one season since they beat the Jennies four times during the 2005-06 season. Washburn is now 8-1 in the first round of the NCAA Tournament under Ron McHenry.