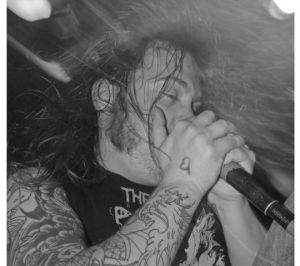 Rehearsing for upcoming shows in a storage unit with hanging lights and posters of their influences on the walls, Sedlec Ossuary is a metal band that screams influences of alternative, classical and even hip hop.

Formed in 2008, Sedlec Ossuary is working on new songs and a second album. The band is named after Sedlec Ossuary a Roman Catholic church in the Czech Republic. The chapel is said to contain more than 50,000 skeletons of people. Many of the bones were arranged in an artistic fashion in the late 19th century. Among the skeletal art is a chandelier that contains at least one of every bone in the human body.

Mike McGloin is the vocalist. Hunter Hallman and Juan Saenz are the guitarists. Washburn student Conner Morton is the bassist and Brooke Arnold plays drums. They practice four to five times per week, for about an hour at a time.

All members have jobs outside of the band. Morton is an environmentalist majoring in psychology and sociology. Saenz said he hangs out as hard as possible when not working and Arnold works at a warehouse when not blasting at 4,000 beats per minute. Hallman who comes from Lawrence, likes to rehearse barefoot.  McGloin plays with the band and spends a lot of time walking his dog.

“Our main goal as a band is to put on a good show,” said Saenz.

They list several bands as having influenced their music. These influences include Black Dolly Murder, Diskreet, Origin, Within the Ruins, Easy E, Wu Tang Clan, BT Bam and Faceless.

“Miley Cyrus is a huge influence too,” said Morton jokingly.

Songs from the band include “World Breaker,” “The Harsh Barge,” “Burn After Rolling,” and “Creatures.”

They describe their sound as most similar to Black Dolly Murder and BT Bam. Their three upcoming shows this spring are scheduled for April and May. April 6, they will play in Lawrence at the Jackpot with the band Osiris. April 14, they will play in Topeka at the Boobie Trap Bar and on May 9, they’ll head to El Torreon with Hester Prynne and Impending Doom.

The band is pre-selling tickets for the April 6 and May 9 shows. The tickets are $12 and $10 for the show respectively. Anyone interested can e-mail Morton at [email protected]

“We want to get people to come back and see us again,” said Hallman. “We are really hyped on the upcoming shows.”