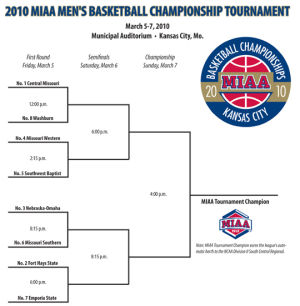 The Ichabods lost with their backs against the wall, but in the end they still backed into a spot in the MIAA tournament.

Washburn extended Wednesday’s regular season finale at Emporia State to overtime, but the Hornets hit 4 of 5 field goals and 10 of 11 free throws in the extra five minutes to win 71-62 and secure the No. 7 seed in this week’s conference tournament.

WU had to wait a little longer to find its postseason fate. Northwest Missouri State had to lose against Missouri Southern on Saturday for the Bods to continue their season in March, and after another overtime nail-biter, the Bearcats lost 89-81, giving WU the eighth and final spot in the MIAA bracket.

The Bods face top-seeded Central Missouri at noon Friday in Kansas City’s Municipal Auditorium. The Mules (25-2, 18-2) have been a top-10 team all season, and are currently ranked No. 2 nationally.

Opening the tournament against a national title contender isn’t a dream match up, but after playing on the bubble all year and losing four of their last six games, the Bods will gladly accept any postseason opponent.

“It’s a good feeling just to make it,” said coach Bob Chipman. “I don’t think we’re going to all of a sudden feel pressure in the tournament because we’ve felt it most of the year. We’ve got a young group that stuck together through some tough stretches.”

UCM beat WU twice this season with a 77-71 win Jan. 2 in Warrensburg, Mo., and a 74-64 win Feb. 10 in Topeka. Both games were close in the final minutes, but All-American forward Sanjay Watts lifted the Mules to victories, scoring 28 points in the first meeting and 17 in the second.

Although the Bods have lost their last five match ups against UCM dating back to 2008, Chipman says the tournament title is still up for grabs when the MIAA’s top eight teams meet in Kansas City.

“They have the mindset that once we get (to the tournament),” Chipman said of his team, “we’re capable of beating anybody. We have the nucleus in place on this team. I think we’re bordering on being really good.”

The team’s progress was hampered midseason by youth, injuries and a tough conference schedule. Taking the court against the Mules when they were ranked No. 1 and Fort Hays State when it was in the top 10 only made matters worse. But now, Chipman says, it’s all about who has the hot hand in the postseason.

“We caught Central (Missouri) and Hays at times when they were playing some of their best ball of the year,” said Chipman. “On the flip side, when we beat Emporia by 31, we were the hot team. Sometimes it just comes down to who’s playing better on that given night. Hopefully we’ve come of age and improved enough that we can be that hot team and prolong our season.”