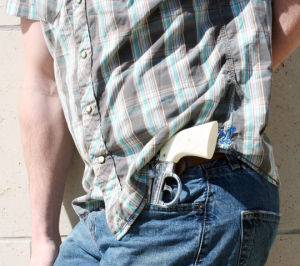 Washburn University could soon be faced with the decision on whether to spend millions of dollars on metal detectors or allow those with proper weapon licenses to tote their guns to class.

Forrest Knox, a House Republican from Altoona, has presented a bill that aims to make it possible for those with proper state issued gun licenses to carry and conceal in previously restricted locations.

In 2006, the Kansas Legislature passed the Kansas Personal and Family Protection Act enabling those meeting specific criterian the ability to carry and conceal their weapon.

The statute, however, contains an article that prohibits carrying a weapon into state or local government buildings including police departments, state departments, schools and universities. Public places are also given the ability to ban weapons by posting an approved sign.

Knox’s bill is attempting to amend the statute and allow guns to be carried in public places that do not have adequate security measures, such as metal detectors, electronic detection or security personnel.

In 2008, the Kansas Board of Regents adhered to the Kansas Personal and Family Protection Act and made Kansas’s six state universities and 19 community colleges weapon free.  If Knox’s bill passes through legislation these campuses will have to look at ways to alter current security policies.

Dean Forester, director of Washburn Police, said what security actions Washburn chooses to take if the amendment passes will be up to the Board of Regents.

Betsy Baker, senior, is concerned about how the proposed changes to the carry and conceal statute could affect Washburn.

“The proposed changes make me nervous for the safety of current students as well as the potential negative financial impact it could have on the university,” said Baker.

Kendra Fritz, junior, said she believes that if special security details have to be put in place it would raise the cost of tuition, something that would be a problem with a lot of students.

Adam Furneaux, sophomore, said he believes that those with the proper licenses should be able to carry and conceal weapons if they choose.

“I don’t think carrying a weapon on campus is any different than going to Wal-Mart with a concealed weapon, there’s a lot of people either way,” said Furneaux.

Baker said if the Board of Regents accepts the changes to the conceal and carry she is concerned about how it will impact the educational environment at Washburn.

“When I’m at Washburn I feel like I’m in a safe place, if I knew there was a possibility someone was carrying a weapon I’d be more reserved and less likely to openly express my opinion,” said Baker.

Knox’s bill was heard in the House Federal and State Affairs Committee Feb. 25. At this time no decision has been made about the future of this statute.