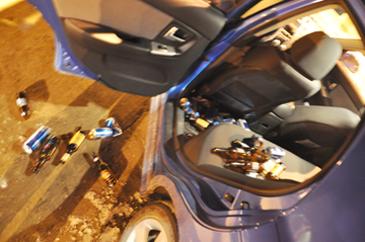 It wasn’t just another night for Beth Strong. After hours of trying to reach her roommate to no avail, a sense of panic settled over the 23 year old. Something was wrong.

It wasn’t until the next day that Strong learned what had happened to her friend the night before.

“My roommate was driving. He was drunk,” said Strong. “The other two guys in the truck were drunk also. The fourth person was a girl, and she was hanging out of the sunroof and flew out going down a dirt road. She was in a coma for a month. It’s been two years and she’s still trying to recover.”

The anxiety Strong felt as a result of the communication-less evening was nothing compared to how she felt after she learned of the accident.

“It is hard to believe that I almost went with them that night,” said Strong.

Drunk driving isn’t a new topic of conversation. But with all of the information available today, especially to those who are well-connected and receiving a higher education, it seems there is a blatant attitude of disregard for personal and public well-being being adopted by some who choose not to drink responsibly.

The legal blood alcohol concentration for an adult over the age of 21 is .08 percent in Kansas. This is roughly the equivalent of two 12-ounce beers in an hour. If a person does drink two beers in an hour, it can take anywhere from two to four hours for his or her BAC to go back down to zero.

If someone is caught driving drunk, consequences can be severe. He or she may serve up to six months in jail, perform community service, go through substance abuse treatment and may have their driver’s license suspended for up to a year.

On a larger scale, drunk driving costs lives and substantial amounts of money. One in five car accidents involve drinking, and two of every five drivers in the United States will be involved in an alcohol-related crash sometime during their lifetime. According to the Kansas Family Partnership, an average of six young people die in alcohol-related crashes every day. The Kansas Department of Transportation estimates that nearly $469 million is lost in the state of Kansas annually due to alcohol-related crashes.

Even though many people are aware of the effects of drinking and driving, some simply ignore the warnings. They get away with it in large part because “a lot of people can drive really well under the influence,” said Sheri Jackson, Washburn police officer. It also helps if a drunk driver is close to their destination to begin with, she said.

“Really they’re just lucky,” said Jackson. “There are more people on the street than cops.”

Jaimie Carey, a freshman, knows the difficulties that result from ignoring warnings about drunk driving. One of her high school classmates was killed in an alcohol-related crash after leaving a party in the country. Carey said she is sad to see so many people neglect responsibility for themselves and the damage they could cause to others. She said she didn’t understand why, even after a classmate died as a result of drunk driving, her peers continued to drink and drive.