Topeka has a need for speed 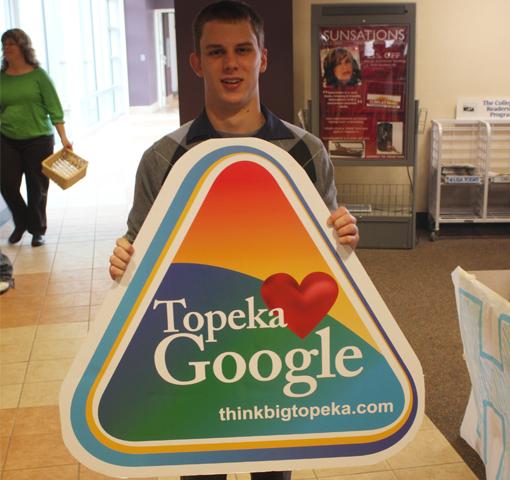 By becoming a test site for Google’s fiber optic experiment Topeka hopes to be the fastest city in the country.

When Google made the announcement Feb. 10 that it would be looking for a few communities to be trial locations in testing its ultra-high speed networks, Jared Starkey took note.

” I saw what Google was doing on an social news site and thought it was exactly what Topeka needs,” said Starkey

Starkey sent Google a form nominating Topeka, got a few friends involved and took the cause to Facebook.

After only three weeks the Facebook group, “Bring Google’s Fiber Experiment to Topeka!” has more than 12,000 members and is still gaining momentum.

“We are where we are because we have an overwhelming amount of public support,” said Starkey.

Google wants to test an ultra-high speed broadband network that will provide Internet speeds more than 100 times faster than what the average American receives today. Fiber-to-the-home will deliver a connection speed of one gigabit per second and give customer’s access to better and faster Internet.

Starkey said he believes that Topeka would receive an economic boost if chosen as a trial location, as any company hoping to make strides in business would want to come to Topeka.  An increase in the number of new businesses being brought to Topeka would likely result in an increase of job opportunities for a more technology savvy generation.

“This could create jobs our generation can latch on to,” said Starkey

James Kirkwood, junior, said that if Google chose Topeka it would mean great things not only for the Topeka community but also Washburn students.

“It would be interesting for students, specifically computer science majors to be part of something like this. They would be able to explore a whole new technology with hands on learning,” said Kirkwood.

Topeka’s quest to become a high-speed hot spot was taken to a whole new level when Topeka Mayor Bill Bunten proclaimed that Topeka was to be known as Google, Kansas for the month of March.

Topeka’s name change has garnered both local and national news, even making its way onto CNN.com

Kirkwood believes the publicity Topeka has received as a result of the name change could be a good thing.

“It may be cheesy but it’s giving the movement national recognition. Hopefully Google will take note,” said Kirkwood.

Google has set a deadline of March 26 for interested communities to turn in their nomination forms. Google plans on announcing its target communities later this year.

“This could be the beginning of a whole new Topeka,” said Starkey.