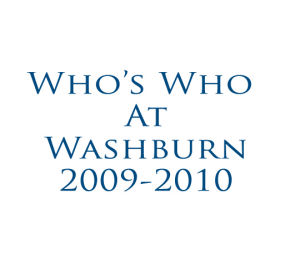 Dean of students Merideth Kidd kicked off the Who’s who ceremony with a song dedicated to the award recipients. 54 students were given the award recognizing their achievements and commitment to Washburn University. Student nominator Joel Bluml tells about the awards’ importance.

“This is one of the best traditions we have at Washburn. It really let’s you get the opportunity to recognize outstanding students, and also learn from them by what they have to say about what makes their experience at Washburn memorable. Hopefully we can keep duplicating that for future generations of Washburn students.”

The Who’s Who award is given to students nominated by Washburn faculty for outstanding achievements and involvement. Nominator Denise Ottinger explains the importance for student involvement.

“I think it reinforces the notion that the students who get involved and get connected with the faculty members, get involved in activities, have a much richer experience than a student who might come to campus, take a class, and go home.”

The Who’s who award is recognized across the nation at universities and colleges. Selections are made each fall and are composed of eligible upper-classmen and graduate students. Washburn Student Nicole Perkeuhn explains the importance of being nominated.

Who’s Who has been honoring students for over 60 years and more than 2,300 schools participate in the in the program. Student involvement is one aspect that is taken into consideration for nomination. Student Josh Maples tells about why students should get involved in extracurricular activities.

“Everyone has their limit on what they want to do and how they get involved but I say push yourself to that limit. If you are becoming overwhelmed, just remember, this is some advice that I was told, you’re not building a piano, everything doesn’t have to be perfect. You just need to do your best. And once you get involved, you will gain experiences, you’ll be rewarded in the long run, and it’s just an awesome experience to graduate with as much flair as you can get.”

Student recipients can add this award to their resume as an academic excellence award. Marsha Carrasco Cooper, director of student activities, says that this award recognizes the transformation that students make throughout their college experience.

This has been Jordan Shefte with the Washburn Review