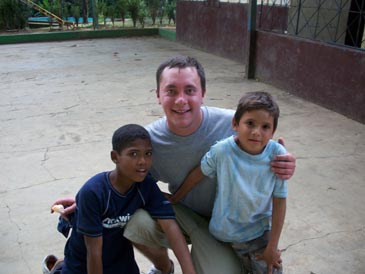 Winded Being out of shape, I am red-faced as a result of playing these young men in a raucous game of soccer. Although I was exhausted, they were hardly tired, as they spend a great deal of their free time playing the sport.

On the second day of the year, I left for Nicaragua with 14 strangers. The trip was a service project intended to broaden our global perspective and that of the people we were to meet. And, speaking for myself, it did. My preconceived notions of Nicaragua were, in retrospect, genuine but probably ethnocentric.

Our first stop was Managua, the capital city. We stayed at the Quaker house there, a commune of sorts, where it is regular for a diversity of travelers to seek board. Some things became apparent immediately. First, water heaters are elusive throughout Nicaragua; therefore, cold showers are inevitable but often welcomed because of the perpetual heat. Second, septic systems capable of digesting paper are also uncommon, so used toilet paper is placed in the waste basket. And one doesn’t realize the habitual nature of flushing paper until they are required to do otherwise—often resulting in fishing it out of the bowl for fear of flooding a bathroom.

Managua is a busy place. About 1,850,000 people live in the city, which is approximately 210 square miles—6,570.8 people per square mile. Public transportation is a spectacle in most regards. When traversing the city, we were always packed, beyond our means, into a cab, micro-bus or my personal favorite: the chicken bus. I have a variety of theories as to why the chicken bus is termed as such. While one waits for the chicken bus to leave a station or stop to pack on more passengers beyond capacity, people approach the window to sell fried chicken—laced with intestinal parasites. More likely, the name comes from the live chickens, which ride as passengers. Livestock is an important staple to some Nicaraguans as it is seen as an investment. And people rely on public transportation as a necessity rather than a choice.

Nicaragua’s socioeconomic atmosphere is scarred from years of governmental oppression, and the progression toward stable civility has been little better than tumultuous. Certainly, Nicaragua was no exception to the historical impact of the Spanish conquest, which happened in that region during the 16th century. Nicaragua’s more recent history, however, was the main topic of discussion during the talks we attended on our trip. Augusto César Sandino is a popular name to hear, as he is regarded as the hero of Nicaragua. Sandino was a general who sustained a guerilla war against Nicaragua’s conservative regime and subsequently against the U.S. Marines, which were present as a result of U.S. occupation. Sandino’s forces prevailed and a new liberal government was installed. In 1936, Anastasio Somoza Garzía came to power as part of a U.S.-engineered pact. This proved to not be a fortunate event for Nicaraguan history. Statues of Sandino portray him with a pen in his right hand—reminiscent of the moment he was called to sign a treaty with Somoza and was shot in the back of the head. After Somoza gained complete dictatorship over the country, he filtered out any of the Nicaraguan National Guard who might oppose him. The brutal ways which opponents of Somoza’s rule were slaughtered were indescribably callous and reverberated through the stories told by surviving relatives. We visited a museum funded by the mother of a fallen challenger to the Somoza regime. She wept as she told his story.

Much of the revolution following Somoza’s regime took place in Managua, and the presidential palace features a variety of images from the revolution, frozen in time as posted photos. There are many people who gather to capitalize from the increased tourism around the palace square, including children, who shape origami out of blades of grass. Bending and ripping the blades into workable pieces, the 12 to 14-year-old boys make flowers, grasshoppers and stars. Suggested gratitude takes the form of a few cordobas—Nicaraguan currency.

This was, for me, when the reality of Nicaragua set in. I was immediately inundated with desire to express my sorrow and sincerity for the people whose lives had been forever changed by oppression and war. But it was explained to me that, though the U.S. government had been involved in a large part of Nicaragua’s ugly past, the people did not resent U.S. citizens. Nicaraguans realize there is a difference between the ideals a government imposes on its citizens, and what citizens of a state truly believe. After all, they know better than anyone that government is not often a well-formulated representation of the public. It is because of U.S. support from college students and others eager to make amends that U.S. civilians have won the respect of Nicaraguans in regards to our people.

One day, as we walked through the streets of the outskirts of Managua, a man frantically crossed the road to meet us. We were apprehensive about his approach, but he came up to us eager to shake our hands.

He lifted up his sleeve to show us his tattoo of the American flag and beamed proudly. I returned his gratitude—honored that our presence was so welcomed.