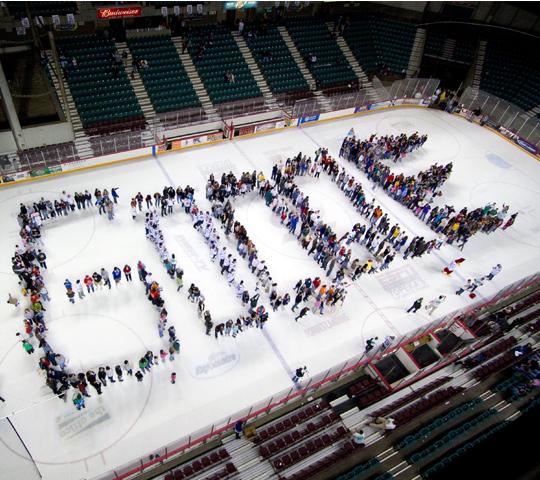 Feelin’ lucky' Sports fans didn’t need a search engine to find hockey action last Thursday as the “Google” RoadRunners defeated the Springfield Jr. Blues 5-2 in front of a season high audience of 7,688 patrons. The ‘Runners sold all 7,777 tickets, however, as part of the Think Big Topeka project.

The Topeka RoadRunners officially recorded a sellout last Thursday and that was only the beginning. They also clinched the North American Hockey League South Division regular season title in the same night.

A night after a 7-4 victory over the Springfield Jr. Blues in front of just over 1,800 fans at the Kansas Expocentre, a nearly-packed house of 7,688 filed into Landon Arena, although they did sell the 7,777 tickets for the game. On this Thursday night, the ‘Runners would again be victorious, defeating the Jr. Blues 5-2 to clinch the regular season title. The St. Louis Bandits also played this past Friday and Saturday, winning both games, but the ‘Runners (44-9-5) maintained their two point lead.

Wednesday’s match gave Topeka a first period lead it would take to intermission, but Springfield jumped on the RoadRunners early in the second period with three straight goals to put the Jr. Blues up 3-1. However, this lead was short-lived as Topeka rattled off three goals to take a 4-3 lead at 17:37 of the second period. The go-ahead goal was Michael Hill’s third of the game, giving him a hat trick, en route to four goals on the night.

The third period gave the ‘Runners a 3-1 goal advantage as the game ended in a 7-4 win. Topeka outshot Springfield 39-30 as Evan Karembelas made 26 saves on 30 shots.

Thursday’s match would also begin slow in terms of goals, but Topeka came out fast and hard, as the shot count read 18-2 after one period of play. Topeka would finally see the building erupt at 2:02 in the second period, when Cole Schneider found the back of the net. Six minutes later, Alec Hagaman would bring it to 2-0. The Jr. Blues cut into the deficit, to make it a 2-1 game into the third period.

Twenty-one seconds into the third, Hagaman would again light the lamp and make it a 3-1 game. Topeka pulled away when Erik Higby scored about six minutes later again to make it 4-1. A Springfield goal cut the lead to two, but a later Bryce Johnson goal sealed the deal. The RoadRunners ended up with an astounding 51-18 shots on goal margin as the game ended. Karembelas made 16 out of 18 stops to pick up the final regular season victory.

Topeka head coach Scott Langer was very pleased with his team’s effort Thursday and about going into the playoffs.

“We talked about things we can control and that’s defense. We were back at it today,” said Langer.

Topeka will play Springfield again in the first round this weekend in Topeka at Landon Arena. Game time is 7:05 p.m. for Friday and Saturday’s contests, which are part of a best 3 out of 5 series. Langer acknowledged the difficulty in playing a team so many times in a row.

“When you play a team that many times in a row, there’s a lot of coaching going on so you definitely have to know they’re gonna come out and show us some different stuff for sure, so we’ll have to be ready for that,” he said. “And we’ll show ‘em a few things that will be different to our game. We got ‘em at home and that’s what we were fighting for. It’ll just take a little bit of time.”

Most importantly, the time between the games was a big key for the players, like Hagaman, who had two goals Thursday night

And now, Langer too is ready for the playoffs.

“It’s very rewarding for these guys. They started early this year and we achieved what we wanted to achieve. Now we have the new season coming up and it’s time to start all over,” he said.