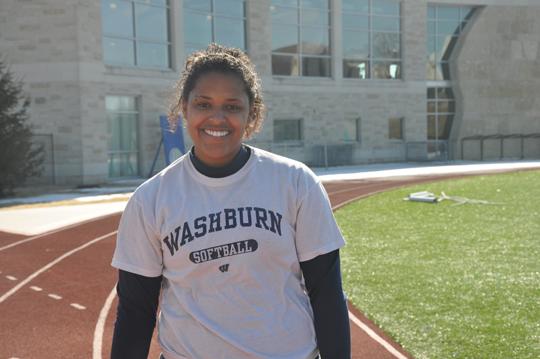 Tish hits Senior third baseman Tish Williams has had a successful career at Washburn. She has hit a school-record 51 home runs, two shy of the MIAA record.

The Lady Blues came back from the weekend having toughed the Lady Buff Invitational in Canyon, Texas.

The first match-up featured West Texas A&M, Friday, which brought a loss for Washburn, 5-9. Next was Central Oklahoma, who also defeated the Blues 2-6.

“Their pitching wasn’t great, I can’t explain why we lost,” said Tish Williams, senior third baseman. “We were too anxious and we weren’t relaxing on the ball.”

Saturday, the Blues took a win and a loss from a double-header against Eastern New Mexico. They faced West Texas again by the end of the weekend, and took the win 6-4.

“The first game, we should have done better,” said Williams, “but we came back and kicked butt. That morning we didn’t wake up tired, we were ready to play.”

On Sunday, Lindsey Himpel, Britny Cushing, Ashley Podschun, Alex Zordel and Williams each had two hits. Williams drove in two runs in the win. In fact, the 5’5 No. 17 has claimed the Lady Blues’ career record with 51 home runs. She needs two more to set the MIAA record. Her batting average is the highest in school history, and she will need as many hits this season as she has runs to become the school’s all-time leader.

Williams, who hails from Edmond, Okla., has been playing ball since the age of five. She stepped into a game of baseball, but her mom decided that her daughter would be good at softball.

“It’s just so much fun,” said Williams. “I’ve met a variety of different people—it’s a good feeling. I’m definitely inspired by my parents.”

As a sophomore in high school, Williams was named Player of the Year. During her senior year, a friend who played for Washburn asked Williams if she would like to come play for the Lady Blues. Williams, not thinking the offer was genuine, said yes. She was playing softball for Washburn the next year. In 2006, Williams sat out the season as a redshirt. For the next three years, she broke records consistently, including her own. When she is done with her softball career she may get her masters in sociology.

The sociology/criminal justice major wants to take all the games this weekend at the Missouri Western Tournament, which starts Saturday with Lewis University in St. Joseph, Mo.

“Whatever happens, happens,” she said. “If we lose, we know we tried our hardest.”