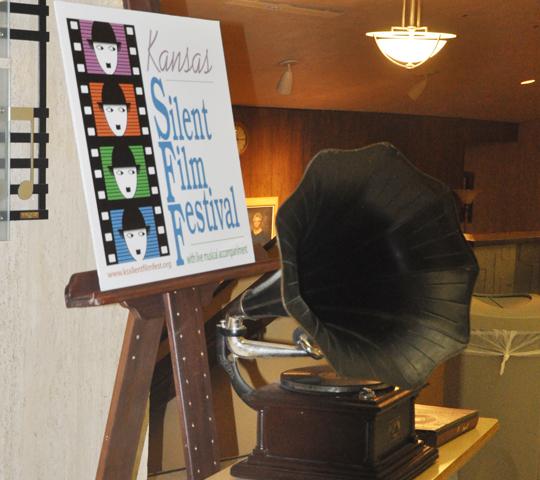 The Kansas Silent Film Festival held at White Concert Hall this past weekend was a success, with a great audience and great films.

The event was highlighted by Melissa Talmadge Cox, the granddaughter of silent film star, Buster Keaton, as the special guest speaker. The night began with a surprise film, picked out by the KSFF director, Bill Shaffer, who tries to pick out films people may have never heard of.

“The surprise films are something I try to pick out and I usually do that because they are very short, unusual and we would find it very hard to fit them into our regular program,” said Shaffer.

One of the surprise films this year was from 1922 and it was a promotional film from First National Pictures called “Seeing Stars.” It was the first time that Keaton and Charlie Chaplin were seen on screen together, something that did not happen again for 30 years. The second film was a montage of clips that were taken out of silent films for censorship reasons, typically for people kissing or showing any sexual contact.

Of the 14 years that this festival has been held, this year was the most successful. The attendance for the first night was 706, the highest attendance of any year. Those in attendance had nothing but good things to tell Shaffer.

“All I heard were very positive, upbeat comments. People seemed thrilled with the whole event. We had people attending from all over and I would say 90 percent of those people said they would be back,” said Shaffer.

Since the event is free for anyone to attend, KSFF depends on donations to stay running each year. The first film of the night included slides and video asking people to remember to donate so that the festival could continue for years to come. This year the donations also reached the highest they have ever been at more than $4,000.

Cox was also very impressed with the festival. It wasn’t the first time she has been to Kansas, but it was her first visit to Topeka. She was well accepted and said she loved meeting everyone. Traveling around the country promoting silent films is something she loves to do because of her passion for silent films.

“I have been to about 12 silent film festivals and most of them have had live music. Growing up as a kid, the silent films that my family members starred in were not available for the public to see. So coming to these and promoting these lost stars and films is a great privilege,” said Cox.

The festival went off perfectly and achieved its goal of introducing younger audiences to the art of silent films, while being able to reacquaint older audiences with the lost art form of the past.

“We are already planning on the festival next year. The donations were a great start to putting on another great show. Next year’s festival will fall on the last weekend in February,” said Shaffer.