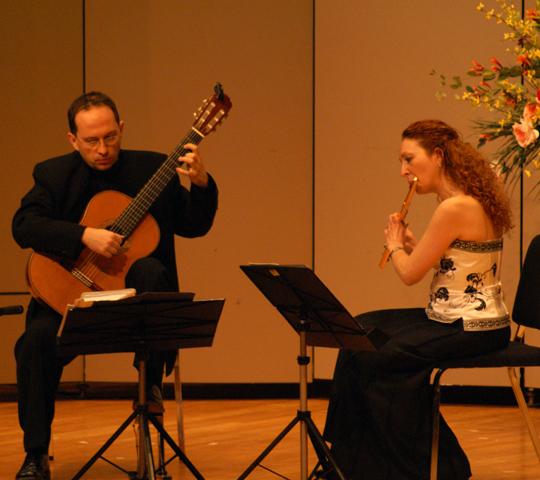 Dynamic duo Denis Azabagic and Eugenia Moliner duet their way into the hearts of audience members Wednesday evening. This husband and wife team was brought to Washburn by the Topeka Community Concert Association.

While St. Patrick’s day festivities were in full force last Wednesday, the sounds of the Cavatina Duo echoed through a packed White Concert Hall.

The Cavatina Duo consists of the husband and wife combination Denis Azabagic, guitarist from Bosnia, and Eugenia Moliner, flautist from Spain. Their unique approach to music inspired members of the diverse audience in attendance.

“It was awesome, I really like Bach so I loved that they included it,” said Michael Packard a local drummer who was in the audience.

“I liked the time signatures, I was very impressed.”

Even before they played, the duo had the room engaged with applause and laughter as they joked about their marriage and accents. Azabagic’s solid black suit complimented Moliner’s white and black dress, as his slow yet complex rhythm guitar complimented her fast paced flute music.

Both musicians appeared to really feel the emotion in the music. Moliner swayed, almost as if dancing along to the music creating both an auditory and visual performance. Moliner and Azabagic played to each other as if having a musical conversation.

Sometimes playful and sometimes dramatic, the couple’s physical and musical interaction was a show in itself. Varying tempo and intensity gave the performance a vivid sense of drama and emotion. As their eyes met while playing, the couple’s musical and romantic chemistry was palpable.

The duo deviated from the program greatly providing an exclusive performance for the eager audience. Transitioning between songs, the couple discussed the piece and engaged the full concert hall with background information and comedic banter between each other.

During the second piece of the evening, Moliner illustrated the concept behind it by moving from three music stands which were to represent the three villages conceptualized in the composition. As she moved between stands the mood and intensity of the music moved with her, creating a real distinction between them.

Members of the audience were nodding their heads and tapping their feet to the guitar rhythms and flute melodies. When Azabagic began beating on his instrument like a drum intermittently between cords, people could be heard muttering words such as “wow,” and “amazing.”

The Cavatina Duo’s avant-garde approach to musical performance was impressive and entertaining. The distinctive combination of flute and guitar played with self-described “irregular rhythms,” provided the audience with a truly rare experience.

“I think it was a very delightful performance, very excellent,” said Doris Hurtig. “To me the combination is very pleasing,”