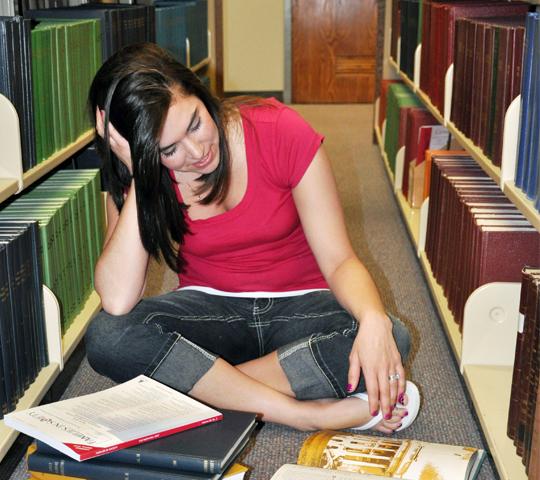 “We had several this morning,” she said.

The common procedure is to question the patient about possible stressors.

“A lot of the students who come in are, within 15 minutes, in tears just from questioning,” Schneider said. “You keep talking to them and, through physical assessment, you can determine how far they are into anxiety.”

Marilynn Koelliker, director of counseling services, said the top two reasons students visit her are because of anxiety and depression. Behavior associated with anxiety or depression is common, she said, such as a sense of being on edge, changes in eating habits, effected sleep patterns, difficulties concentrating and physical symptoms such as headaches and fatigue.

“I had a student tell me she goes blank when she goes to take a test,” said Koelliker.

It is common for college students to experience stress, but the causes for stress vary and are often difficult to identify.

“What it usually boils down to,” said Schneider, “is that they’re developing adult coping mechanisms for the first time in their life. They may be taking 20 credit hours, away from home for the first time, worried about grades, working and they may have financial issues. But that’s ‘normal.’ Now you throw in that they may be failing a class, questioning their sexual orientation, maybe pregnant or other family dynamics.”

“Oftentimes in an academic setting, the plate is so full that students can’t even manage to prioritize,” said Koelliker, “and it feels whelming to even start approaching.”

“I feel really stressed,” said Alyse Jackson, senior finance and economics major. “I go to school and I work, and I’m trying to find a job.”

Jackson said she feels as though she represents the average college student in terms of her workload and stress level. She is enrolled in 12 credit hours, and with studying time, school accounts for 35 hours a week in addition to the 20 to 30 hours that she spends working at Lowe’s.

“It doesn’t seem like you have any free time,” she said, “and it becomes 1 o’clock in the morning before you decide that’s all you can get done. I just get worried that I’m not going to finish projects so I start to cut corners, which makes you stress more.”

Schneider said students should visit campus counseling if they can get themselves to do so, and they will work with the possible embarrassment of asking for help.

“Students who do, find it’s well worth their time, and we reassure that they are, by no means, the exception,” she said.

“I feel like it would be a waste of time,” said Jackson. “If I go over there for an hour, then that’s an hour I have to make up later. That’s an hour I’ve spent not being productive. I think stress is just a part of being in college. It’s time allocation. Just make sure you have a set schedule and don’t procrastinate.”

Schneider said reducing stress “is not reinventing the wheel,” and the simple pre-cautions are a balanced diet and exercise.

“It’s a normal part of our life,” said Koelliker, “and none of us escape stress and anxiety. Sometimes it’s good.”